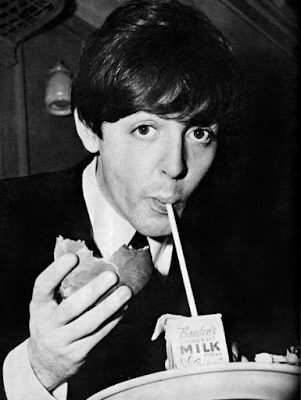 For the record I don't think Ob-La-Di is a terrible song – it's a great piece of family friendly lowbrow entertainment written and played with real craftsmanship and made to look deceptively easy. It's like the perfect McDonald's meal. It's probably not good for you as your only diet but I'd like to see you go behind the counter and put one together yourself.

McCartney (with a little help from his friends) displays his gift for doing the very simple and accessible brilliantly. The building blocks are mundane. The structure is V C V C B etc. The chords almost entirely diatonic ('in-key') with only the Bb7 in the bridge (2:16) implied by saxes, venturing 'outside' (Ticket 28). The bridge builds back into the verse with via the V chord (1:31) just like they did in Twist And Shout (Ticket 65). We have a bit of a descant (Ticket 58) coming in at 1:01, the helium effect the obvious result of varispeeding the tape. 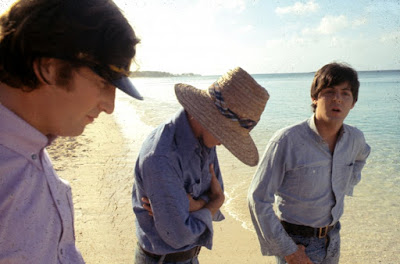 In the chorus he repeats the same three notes for

Secondly, in the verse he develops a musical cell (Ticket 9), essentially taking a melodic fragment and moving it up one scale tone each time.

All We Hear Is Radio Bla-Da


A third simple trick he employs is using the 'Aeolian Cadence' (Ticket 10) finishing on the relative minor chord instead of the tonic chord. Here he uses it to delay the ending rather than change it. 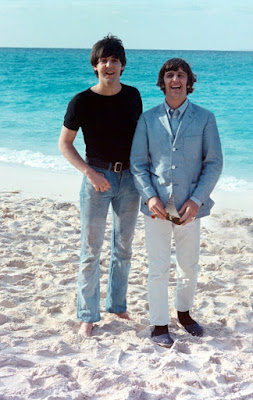 Most songs finish with the melody arriving on the root note on the final syllable as the chords land on the tonic chord (in this song a Bb note on a Bb major chord). In the chorus, the melody

This still works, because there's a Bb note in Gm. But that chord (the relative minor or vi chord in the key of Bb) makes us feel like we've been left hanging. Then Paul sings "and if you want some fun..." before the melody walks all the way back down "...sing ob-la-di, bla-da" and Bb note reunites with Bb chord. Hi honey we're home!

Winston And The Trolley Problem 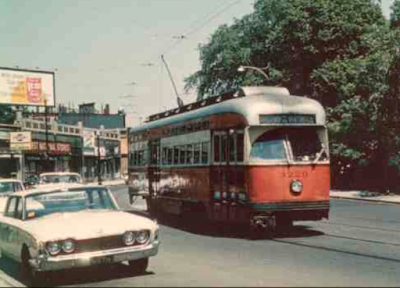 It’s a very me song, in as much as it’s a fantasy about a couple of people who don’t really exist, Desmond and Molly. I’m keen on names too. Desmond is a very Caribbean name. It could have been Winston, that would have been all right.

A ridiculously simple and repetitive rhyme scheme (ABAB) - place/face, band/hand in verse 1, 3 and 4 (reversing hand/band in 3 and 4) and store/door, ring/sing in verse 2. Straight repetition in the two bridges and verse 3 and 4. And parallel lyrics (Ticket 24) to increase the stickiness everywhere.

but the structure of the entire song is built on the lyrical framework of 'Desmond does this, Molly does that' – though Desmond and Molly's positions shift around the verses as aren't always at the same melodic points.

Has a barrow in the market place / happy ever after in the market place
The singer in a band / sings it with the band
Molly … I like your face / Molly ... does her pretty face
Takes him by the hand / children lend a hand
Desmond says to Molly / Molly says this

Very workmanlike but very effective. The only part that stands out is the clever internal rhyme

Desmond takes a trolley / takes it back to Molly

which is surely a result John and Paul's fantastic ear for how words 'sing' than any grand plan. Why else would you take a trolley?

The Beatles had a long history of spoofing lyrics*, constantly messing about for 'laffs'. Paul's first impression of John was to marvel at the way he rewrote lyrics that he didn't know or couldn't remember. So perhaps Paul's "genuine mistake" with the line “Desmond stays at home and does his pretty face” (2:34) was simply playing for laughs as Lennon did with the song in the Abbey Road sessions: "Desmond has a sparrow in his pocket book, Molly had an eagle in the Strand" finishing off with "And if you want some jam!.."


This spoofing is not confined to the lead vocals either. Amid the laughter, genuine (3:06) and fake "ha ha ha" (1:34), there are barely audible asides from John and George all designed to let some air out of Paul's beautiful balloon.

Though premeditated to some degree, this is still an example of leaving your mistakes in (Ticket 72). Just like counting in, musicians mess around all the time, but most of the mess is cleaned up before the song is offered for public consumption.

The Beatles had a long history of spoofing lyrics
The frequently altered lyrics live, name-checking local vicars, Bob Wooler and other audience members and changing "shimmy, shimmy" to "shitty shitty" in I Wish I Could Shimmy Like My Sister Kate and "I'm so blue and lonely" to "I'm so bloody lonely" in I Forgot To Remember To Forget. Raining In My Heart became Raining In The Yard and Sharing You - Shaving You.
Mark Lewisohn: Tune In (p.128, 419, 429, 539, 606, 680, 821).


70+ Songwriting Tips From The Beatles
The Be-Atletudes
About Beatles Songwriting Academy
Posted by Matt Blick at 12:38