Through the Beatles in One Year 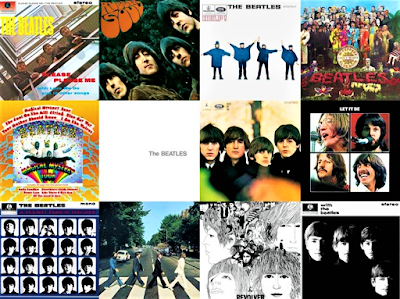 This is a set of a playlists designed to take you chronologically through all the Beatles officially released songs, omitting needless repetition, slight variations and 'posthumous' tracks. Though I've listed the songs on every album in the order the Beatles started recording them, followed by additional tracks from the same time period, I'd suggested listening in the normal album running order, as the Beatles intended. I've selected all tracks from the standard version of the 14 official albums but included some possible alternates at the end drawn from the remixes that have been done by Giles Martin and others.

Why am I making this so complicated?

Tracking the Beatles isn't as simple as putting the albums in release order for a number of reasons:

1) Most Beatles singles (and some EP tracks) didn’t appear on any albums. They were only gathered together later on the Past Masters album.

2) The Beatles released totally different albums in the US with different track listings (and sometimes different mixes) up until Revolver.

3) Magical Mystery Tour was a 6 track EP in the UK but a full length album in the US bulked up with miscellaneous tracks.

5) Let It Be was released after Abbey Road, even though almost all of it was recorded before.

The Beatles of mid-1963 are obviously a fantastic live band which allows them to record most of their debut album in a single day. Nearly half of this set is covers, most of them recent. Though John and Paul had started writing together in 1957 most of the original tracks here were composed once they were close to recording and publishing deals. There are some nice songwriting ideas, musically more than lyrically, though they seem to struggle with writing decent bridges. But Please Please Me and From Me To You show that they were quickly mastering the pop song form.

Please Please Me (album) - all tracks

Love Me Do
P.S. I Love You
Please Please Me
Ask Me Why
There’s A Place
I Saw Her Standing There
A Taste Of Honey
Do You Want To Know A Secret
Misery
Anna
Boys
Chains
Baby It’s You
Twist And Shout

From Me To You
Thank You Girl

The Beatles clearly didn’t suffer from second album syndrome as With The Beatles is an obvious step forward from Please Please Me. Partly because they still had the option of doing covers, they were able to crank out a decent collection of originals (including 'I Wanna Be Your Man' which was also a hit for the Rolling Stones) a mere six months after their debut. The two singles show Lennon and McCartney mastering the 'beat music' song form, and George gets his first songwriting credit with 'Don’t Bother Me'.

With The Beatles (all tracks)

Touring incessantly, appearing on TV, hosting their own radio show, appearing in pantomime and starring in their own film, the band still managed to record a soundtrack album composed completely of self-penned songs - one of the first bands ever to do so. For once the singles were drawn exclusively from the album, so they released an EP of rock and roll covers too.

A Hard Day's Night (all tracks)

Long Tall Sally
I Call Your Name
Matchbox
Slow Down

More touring, more TV, more of everything. Understandably tiredness is starting to set in, with several of the covers songs third choice Hamburg tunes and original songs that date back to when the Beatles were called the Quarrymen. But there are still high points - from Paul's raucous Little Richard tribute 'Kansas City' to 'I’m A Loser', John's early clue to the new direction.

Beatles For Sale (all tracks)

She’s A Woman
I Feel Fine

The Beatles return to form with their second film soundtrack. Paul, inspired by the ups and down of his relationship with Jane Asher is starting to contribute more songs, as is George who adds two songs ('I Need You' and 'You Like Me Too Much'). 'Yesterday', one of the most covered songs in history is the first song to feature a solo Beatle. B-sides 'I’m Down' and 'Yes It Is' round out the set.

Ticket To Ride
Another Girl
I Need You
The Night Before
You Like Me Too Much
You’ve Got To Hide Your Love Away
Tell Me What You See
You’re Going To Lose That Girl
Help!
Dizzy Miss Lizzy
I’ve Just Seen A Face
Yesterday
It’s Only Love
Act Naturally

I’m Down
Yes It Is
Bad Boy

Leaving any semblance of their beat music origins behind (other than completing 'Wait' – a song left unfinished during the Help! sessions) the Beatles start to incorporate the influence of Bob Dylan and Indian music. Lennon and McCartney are no longer locking eyes with adorning fans but rather telling stories or even jokes ('Drive My Car', 'Norwegian Wood') and taking tentative steps towards more confessional writing ('In My Life', 'I’m Looking Through You'). They have also (with one minor exception) left cover versions behind.

Day Tripper
We Can Work It Out

The planned follow up film to Help! fails to materialises, leaving the band with more time to concentrate on the studio. Closing track 'Tomorrow Never Knows' is the first song recorded - a groundbreaking blend of psychedelic lyrics, Indian instruments and avant garde tape loops over hypnotic rhythm section captured with innovative studio techniques. From there the band push out in every conceivable direction at once. The world tour that follows sees them unable to reproduce a single song live. They face death threats in Japan and the US and are harassed by the military in the Philippines. Battered and bruised by the time they return to England, they decide to remain studio musicians.

Tomorrow Never Knows
Got To Get You Into My Life
Love You To
Doctor Robert
And Your Bird Can Sing
Taxman
I’m Only Sleeping
Eleanor Rigby
For No One
Yellow Submarine
I Want To Tell You
Good Day Sunshine
Here, There And Everywhere
She Said She Said

Free from the shackles of live performing and the press conferences that go with it the Beatles are free to reinvent themselves. So why not go all the way, and become an entirely new band? While they don't sustain the pretence the resulting album and double a-side single codify psychedelia and define the Summer of Love. George's 'Only A Northern Song' doesn't make the cut but his solo-Beatles track 'Within You Without You' introduces world music to mainstream audiences.

Only A Northern Song

How do the Beatles spend the rest of 1967 after releasing the greatest album of all time? Ten days after finishing Sgt. Pepper the band start recording the soundtrack for their BBC TV special Magical Mystery Tour. They chip in a few songs for the animated film Yellow Submarine, donate another to the WWF charity album ('Across The Universe') and release a couple singles. Oh, and they write 'All You Need Is Love' for a TV broadcast and perform it live in front of 200 million viewers.

Magical Mystery Tour
Your Mother Should Know
I Am The Walrus
Blue Jay Way
Flying
The Fool On The Hill
Hello, Goodbye

The Inner Light
Lady Madonna
Across The Universe

1967 had seen the band conquer the world from the safety of their recording studio, but it had also dealt them the twin blows of a critical backlash to their amateurish and impenetrable TV special and the loss of manager Brian Epstein to a drug overdose. Drawn to Indian mysticism the band spend several month meditating in India and regroup, clear their heads and write about 30 new songs. While their competitors are still working on their own versions of Sgt. Pepper, the Beatles strip the psychedelic paint off their instruments and release the new songs in a plain white cover. Tensions arise as the members pull in different directions but 'The White Album' is big enough to contain multitudes.

The Beatles aka The White Album (all tracks)

Revolution 1
Don’t Pass Me By
Revolution 9
Blackbird
Everybody’s Got Something To Hide Except For Me And My Monkey
Good Night
Ob-La-Di, Ob-La-Da
Cry Baby Cry
Helter Skelter
Sexy Sadie
While My Guitar Gently Weeps
Mother Nature’s Son
Yer Blues
Rocky Raccoon
Wild Honey Pie
Back In The USSR
Dear Prudence
Glass Onion
I Will
Birthday
Piggies
Happiness Is A Warm Gun
Honey Pie
Savoy Truffle
Martha My Dear
Long, Long, Long
I’m So Tired
The Continuing Story Of Bungalow Bill
Why Don’t We Do It In The Road
Julia

November - Let It Be (Jan 69 - with later additional overdubs)

Just as they had with Sgt. Pepper, the Beatles decide to follow the White Album with a visual project. 'Get Back' is envisioned as a 'live in concert' TV special with behind the scenes bonus footage. But no one can agree on where the concert should be, rehearsals take place on an inhospitable sound stage, the band's newly built studio facility is a technical nightmare and the band are struggling to write suitable material. The whole mess is endlessly mixed and remixed as the band move on - recording and releasing a completely new album in the meantime. Which is to say, Let It Be (as it was eventually renamed) is not the disappointing coda to a glorious career (as the film, with it's delayed release date, implied) but merely an example of what happens when talented musicians spend a month in the studio with no clear idea of what they're doing there.

*'I Me Mine' was the last song the Beatles recorded but it was already ‘in the can’ (albeit in a film can) before Abbey Road was recorded so it is included here rather than in the final playlist.

Let It Be (all tracks except Across the Universe)

Don’t Let Me Down

Chastened by the Let It Be debacle the band return to what had brought them success in the past: make a 'long playing record' at EMI studios with George Martin. John and Paul are no longer functioning properly as a songwriting team, something that can be deduced from the half-finished nature of many of the tracks. However, these fragments are masterfully stitched together by Paul and George Martin in the medley known as 'The Long One' which, surprisingly, works like a charm. More surprisingly the best songs on the album are George Harrison's 'Something' and 'Here Comes The Sun'. All this, wedded to the quality of the production and performances, lift the album immeasurably, making it a fitting end to seven glorious years of music.

I Want You (She’s So Heavy)
Something
Oh! Darling
Octopus’s Garden
You Never Give Me Your Money
Her Majesty
Golden Slumbers
Carry That Weight
Here Comes The Sun
Maxwell’s Silver Hammer
Come Together
The End
Sun King
Mean Mr Mustard
Polythene Pam
She Came In Through The Bathroom Window
Because

The Ballad Of John And Yoko
Old Brown Shoe