The Songwriting Secrets Of The Beatles: Introduction 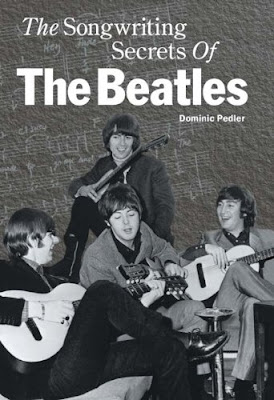 In Dec 09 I decided that deconstructing all the Beatles songs would be a great way to learn the craft of songwriting. Starting Beatles Songwriting Academy was secondary to that goal. This blog has been helpful to a few others and it's certainly helped me, providing motivation to keep going and the increased understanding that comes from forcing myself to put into words and examples what it is that makes the songs work (or not).

For those exact same reasons I've decided to do a 'blog within a blog' and note my journey through the encyclopedic The Songwriting Secrets of the Beatles by Dominic Pedler. (Don't worry! I'll still be making my own way through the songs too!)

[Update. That was a dumb idea. I've finished the book now. It's brilliant. I'll post a review some time]

I've probably read around 20 books on the Beatles so far but I think this one possible comes closest to the heart of what I'm trying to do here.

A few things put me off buying this book. It was based on articles that first appeared in a UK guitar magazine (which made me think 'superficial and thrown together'), it was really expensive which seemed to be down to it's unavailability and lastly the title 'Songwriting Secrets...' has just a hint of 'snake oil' about it. I don't think there are many secrets that are beyond anyone with an instrument 15 CDs and about 3 or 4 years of free time!

Most of the reasons against were blown away when I learned that the book is 791 pages long! But I was still wary. This book looked such a perfect fit for my blog that I was afraid that on reading it I would come to the conclusion I should have just bought this book and never bothered starting Beatles Songwriting Academy.

The sentence that saved BSA

This book is intended as … a companion guide … with appreciation the main goal and any tips that future songwriters might glean just a bonus (p.xx)

So diving in, here's random notes, quotes and thoughts from the introduction

No stone is left unturned in Beatles culture except, too often, the only thing that really matters. The music itself. (p. xvii)

Couldn't agree more. That's what put me off studying them initially and what I occasionally trash what I consider to be a bad song. Because you can't venerate and evaluate at the same time.

Pedler talks about a goldmine of musical nuggets lurking in every corner of the catalogue (p.xx) and he does a great job of pulling illustrations from Anthology, early covers and even songs that the Beatles knew and loved. He also goes out of his way to demonstrate where Lennon & McCartney used exactly the same ideas.

The book is very guitar-centric which is more of a strength than a weakness as it keeps in focus that Lennon, McCartney and Harrison were guitarists first. That said, it's surprising that 13 out of 17 chapters are concerned entirely with chord progressions and melody and lyrical discussions receive relatively little space. However it seems churlish to complain a book of nearly 800 pages doesn't go into enough depth! I think if you're trying to get into the mind of Lennon & McCartney chord progressions are probably a good starting place.

Apart from Beatles fans this book would serve as an excellent way to learn musical theory for anyone who has at least passing knowledge or tolerance for the Beatles. After all if you buy any book on musical theory the examples are probably going to be from a million different classical pieces. Here the examples are draw from a pretty limited number of CDs/songs and are more easily applicable to modern music than something Verdi did.