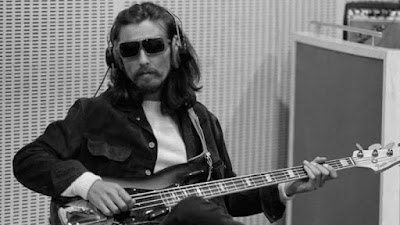 
Lewisohn says the bass was overdubbed the day after the basic track with two Lennon vocals and the BVs but the 50th ann version of Take 18 doesn't have these BVs – just the bass. But it does have some embryonic samples/farting around from the Lennons which were supposed to be recorded later, with (or after) the drum overdub which is also missing. So something's confused.

Why I think Harrison did it


Paul played piano live (with John on acoustic and Ringo drums) and the bass 'seems' to be cut live at the same time. It's hard to believe they would have a full on extended jam with no bass. Take 18 (on the the 50th ann) has a bass line for it's entirety. It's unlikely anyone would think it worth while to continue playing for the whole extended freakout unless they were there at the time (and not overdubbing).

The bass is very unlike Paul - jamming or overdubbing. Compare how 'Pianist Paul' gets loose and wild, whereas 'Bassist Paul' seems to be happy with hanging on the root notes but overly enamoured with doing crazy slides. I can't believe Paul, given all the aimless filler in the last half of the track, wouldn't try to put in a lot more clever stuff - certainly a lot cleverer that a bunch of quick slides. The only McCartney-esque flourish is the descending line in the pre-chorus. However it does sounds a little 'indian' which points to …

George Harrison did play bass on some tracks like Maxwell's Silver Hammer, Honey Pie and She Said She Said.

Therefore I suspect George in Studio Three with the Fender VI.

But on the other hand


Paul did overdubbed bass on Revolution the single at a later date so it's possible he did the same thing here. Though on the other other hand (third hand?) this may be the source of the confusion about the album version.

What would decide it


Is there bass on earlier takes (1-17) of Revolution 1? Then it's definitely Harrison. Paul couldn't play piano and bass at the same time and they would have never overdubbed bass on discarded rehearsal takes. If there isn't it probably is an overdub by Paul.

Is there bass spill on the stems of Lennon's acoustic guitar, Paul's piano or Ringo's initial drums part? Then it's definitely Harrison. Later overdubs would not leak onto earlier tracks.

Is George's voice audible as studio chatter on the original takes. Then it's probably Harrison on bass. He wasn't involved otherwise.


If George played the bass - the lead guitarist laid down a uninspired bass take during an extended jam session that somehow morphed into a album track. So what!

But if Paul played the bass – arguably Paul's unimaginative bass playing 'ruined' Revolution 1 just like John's error-strewn take 'ruined' The Long And Winding Road. Listen to verses 2 and 3 (1:21) – the bass inexplicably abandons the walking line of the first verse, ignores the chord changes and hangs on the root note, which in turned forced George Martin into arguably his most uninspired horn arrangement.

After two less than stellar versions – Lennon could have taken another crack but he lacked Paul's stamina. So where Paul would power through a Maxwell or an Ob-La-Di, Lennon gave up on tunes like Across The Universe.