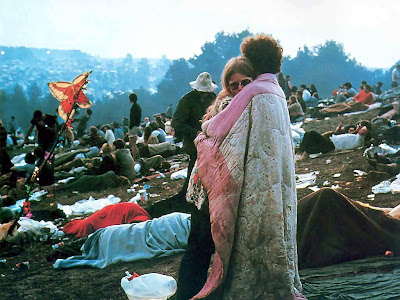 On 15th Aug 1969, while the Woodstock festival was kicking off in Bethel, New York, George Martin & The Beatles were in London laying down the orchestral overdubs for five of the songs on Abbey Road . For once the Beatles weren’t at the centre of the musical universe. But more remarkable from a songwriter’s perspective this was one of the few times they worked on several songs at once.


Saving the world, one song at a time

Like every other songwriter on the planet Lennon & McCartney always had numerous ideas on the back burner but one thing they habitually did (in terms of recording) was work on every song to completion. They very rarely focused on more than one song at a time.

Just let that sink in for a moment.

Picture just about every band you know. They go into the studio to record an album. First they lay down all the drum tracks. With b-sides involved this may be up to 25 songs. And 25 bass tracks. And so on. Weeks may elapse between laying down each instrument. Once the initial scratch tracks are done the rest of the band may not even be present. And even at the point that the songs are tracked the vocal lines and lyrics may still be unwritten. That’s certainly the case with Aerosmith, Led Zeppelin, U2 and Metallica.

The Beatles however went in and hammered away at a song till it was finished and only when it was in the can did they move on to the next one. The only modern artist I know of with a similar way of working is Prince.

Ever wondered how the Beatles (and Prince) were able to handle such a wide range of styles convincingly?

Because this way of working allows you to totally submerge yourself in the song. It’s just too hard to switch gears between being children’s entertainers one minute (Yellow Submarine) and drug-fuelled visionaries (A Day In The Life) the next.

Rather than getting stuck in a “rhythm guitar overdub” frame of mind this approach allows you to get into a “song XYZ” frame of mind. After all, how unified do an album’s worth of bass lines need to be? Not as unified as all the elements of a song do.

Doing a complete song in a short space of time also gives you a much clearer sense of the song’s merits. How many rhythm tracks have been laboriously polished only to discover that, when the vocal track arrives at the 11th hour, the song sucks?


So why don’t more people do it the Abbey Road way? Well, when it takes a whole day to mic up a drum kit, it makes financial sense to record as many drum tracks as you can in one go.

Here’s a bunch of observations on that.

Creating a perfect drum sound has become a quest for the holy grail requiring a mic for every piece of the kit, a channel for every mic & e.q. & outboard effects for every channel. No wonder it takes so long. Is the amount of time and money spent worth it? 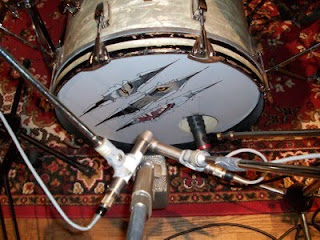 There’s a stunning lack of unified drum sounds even on individual Beatles tracks. But be honest. Have you ever noticed the change in drum sounds on She Loves You  (1:23) and Strawberry Fields Forever (1:00) or the accidental phasing on From Me To You  (0:06)? Or is your focus on the song?


What’s best for the band and the song should never be overruled by what’s most convenient for the studio and the producer.What a band needs most is a large room with some separation, which is most like their normal playing environment.

In the 60’s Abbey Road was a combination of outdated gear and huge rooms that was pretty much at the Beatles’ disposal 24/7. By comparison many modern studios are overstocked broom closets too claustrophobic for any band bigger than the White Stripes.

If your Abbey Road is a laptop and a few mics there’s little advantage doing any instrument wholesale anyway. So immerse yourself in the song, finish it and move on.

In a ‘real’ studio keep the time from the first count in to the final overdub as short as possible. Even if you go back later and remix or rerecord (as they did with Strawberry Fields, Ob-La-Di & Hold Me Tight) you’ve still wasted less time and focus. If one song at a time sounds too radical, try thinking of your album as a collection of 3 track EPs. Finish each EP totally before moving on.

Try to write something out of your genre. A kid’s song, a thrash metal song, a hymn, a comedy number, an R&B jam. Give yourself to it for a few days. Complete it, mix it and move on. Devoting yourself to a single (left field) project for a few days could produce amazing results and even refresh you as a songwriter.

Email ThisBlogThis!Share to TwitterShare to FacebookShare to Pinterest
Labels: Be-atletudes, From Me To You, Led Zeppelin, Metallica, Prince, Recording, She Loves You, Strawberry Fields Forever, U2