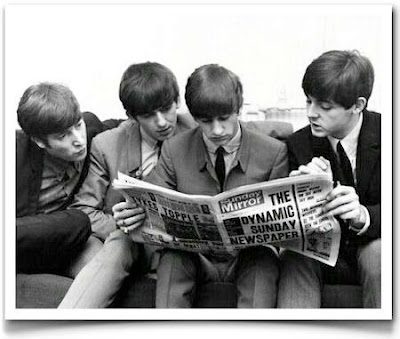 From Me To You was the band’s third single. It’s a classic song, notable for at least three things.

They could work incredibly fast.

Written on 28th Feb, recorded 5 Mar, mixed 14 Mar, released 11 April.
That’s 5 days from writing to recording.
Written, edited & mixed in 2 weeks
and only 42 days from creation to being in the charts.
Un-Believable.

It has a wonderfully smooth transition to and from the verse and really feels a part of the song (something they didn’t always pull off at this stage in their career). They use some key changes and progressions that are pretty stock in jazz but sound fresh transplanted into ‘beat’ music.

The song is also notable for being the first set of lyrics they managed to write that were any good. Though, to use a painting illustration, I mean good, not in a Mona Lisa sense but good as in “the boys made a really good job of painting the spare room.” Simple lyrics, consistent and reasonably cliché free (at least for the Beatles), a nice example of that early Beatles directness. They are singing the song to ‘YOU’.

The biggest aid to memorability though is the fact you hear almost the entire lyrics twice in only 1:58.

Rather than telling us he’s blue as he does in so many songs Lennon shows us by using the b3 of C major (Eb) in the melody. The note appears on

Once again the Intro is an adaption of another part of the song (this time the first line of the verse melody) and is brief (only 2 bars long).

The end is a vocal & harmonica call and response built from the last two notes of the verse followed by a quick recap of the harmonica intro creating a really nice bookend effect.

Some interesting non-diatonic chords here and there – a couple of augmented chords and the F7 (iv7) that’s implied by Lennon’s bluesy melody.

Lastly, though it’s an accident, I like the weird phasing on the drum fill (at 0:06 on the mono mix) - a result of editing two different takes together apparently.

T22 Lennon’s blues melody formula. Add the b3, b5 or b7 into major key melodies. Be bold dahling!

T23  write less lyrics. Repeat the first verse rather than writing a 3rd or 4th.

T4 & T9 Create new sections and melodies out of old
T10 End on the vi
and the ever present Brevity (T2)
and single ringing last chord (T18).

Email ThisBlogThis!Share to TwitterShare to FacebookShare to Pinterest
Labels: Classic Tracks, From Me To You, PAST MASTERS, PLEASE PLEASE ME, Singles