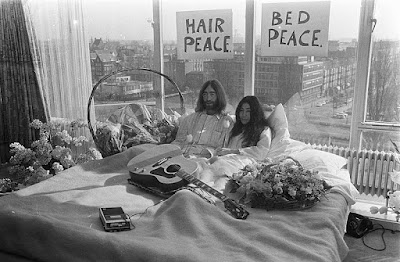 Revolution is one of Lennon's most tightly structured lyrics. You can break the whole song down as follows

pre-chorus: “But when you propose this other thing, that's going too far”.

Chorus: “You should just chill out”.

A Mild Case of Rhymes Disease

but where While My Guitar Gently Weeps (and Dig A Pony for that matter) succumb to Rhymes Disease, letting rhymes dictate what the song is saying and being so obvious that it distracts from the meaning, Revolution's wordplay manages to be cute and memorable.

In this it shares much with it's spiritual successor, Give Peace A Chance. Released a year later it's another campfire friendly peace anthem, marrying a rhyme-laden, preachy verse to a mantra like chorus. It even gives the previous song a self-referential nod "everybody's talking 'bout revolution, evolution..." If anything Give Peace A Chance distils the core concepts even further and is arguably more successful for it.

Don't Break It Till You Make It


The Beatles weren't afraid to break a rhyme scheme (Ticket 73) if they had a good reason, but here Lennon does something different. The first verse has one rhyme (A) and two repeated lines (b & c), and the first pre-chorus doesn't rhyme at all (X)

A You say you want a revolution
b Well, you know
c We all want to change the world

A You tell me that it's evolution
b Well, you know
c We all want to change the world

A You say you got a real solution
b Well, you know
C We'd all love to see the plan

A You ask me for a contribution
b Well, you know
C We're doing what we can

A You say you'll change the constitution
b Well, you know
C We all want to change your head

A You tell me it's the institution
b Well, you know
C You better free you mind instead

The rhyme structure works brilliantly as it is (admit it, you didn't even notice, right?) but if the order of the verses are reversed the lack of rhymes in the first part lands badly, especially on the pre-chorus (destruction/count me out). Once you've set up the expectation of rhyme you're committed. So Lennon wisely doesn't let his poetic soul write cheques his rhyming dictionary can't cash. Or something.

This shows how skilful you have to be to use ticket 73. To break a rhyme you really have to be obeying some higher logic or structure device that the listener can sense if only subconsciously.


Ticket 24: Repeat words and sentence structures
Ticket 73: Interrupt the rhyme scheme by rhyming with a previous section or anticipating one that follows

Email ThisBlogThis!Share to TwitterShare to FacebookShare to Pinterest
Labels: Dig It, Give Peace A Chance, Revolution, Revolution 1, THE BEATLES aka WHITE ALBUM, While My Guitar Gently Weeps