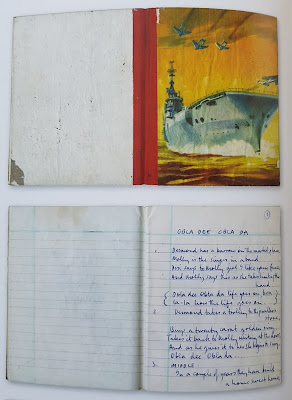 Ob-La-Di Ob-La-Da appears in Paul's “Spring Songs: Rishikesh 1968” notebook titled 'Obla Dee Obla Da'. The Esher demo like all other versions is played in A but tuned down a semitone like many of the other demos. Paul harmonises nicely with himself. There's some percussion and someone is shaking a axatse/shekere/calabash. 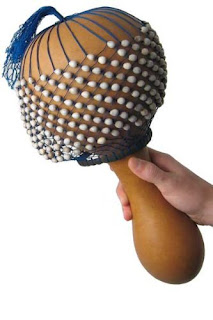 The coda spends only one bar on the vi chord (3:00) to the finished version's two bars.

The track listing reveals that Version 1 had three saxes, a conga drum (played by Jimmy Scott, the originator of the title phrase) and a piccolo that was wiped almost immediately to make room for an 'acoustic bass doubling the bass line'. I think this is an error I can't hear anything doubling the, frankly erratic, bass line, (listen to 'Take 5' on Anthology 3) and there doesn't seem to be this a double bass or an acoustic bass guitar that the Beatles used or had lying around (see Beatles Gear). I think this 'doubling' comment refers to Version 2 and the piccolo was wiped for McCartney's only bass overdub.

Take 3 of version 1 appears as an 'outtake'. McCartney's 'chick-a-boom' asides, 'one bar' coda and self harmonising from the Esher demo are all still present. Take 5 (the Anthology 3 track) is the same take with overdubs - some busy sax parts, Jimmy's very busy congas and Paul's extremely busy bass. Version 1 also seems to speed up half way through. But the tiny cowbell overdub is cool.

Version 2 also has three saxes but no Jimmy.

Here's a theory: Was one reason for recording a second version that McCartney uncomfortable with having Jimmy Scott on the track? Unable to remove him as saxes and percussion were all recorded on the same track, Ringo later added another conga overdub anyway. Was Paul worried Jimmy's claim to authorship would be strengthened if he actually appearing on the disputed track? Or was it just his busy conga playing?

This time we have a distorted acoustic guitar doubling the very much simplified bass line.

Version 3 was attempted (with Paul on drums) but abandoned after a couple of takes and the band returned to finish version 2 which was recorded in A and tape sped up to Bb (noticeably affecting the backing vocals at 1:09).

The line “Desmond stays at home and does his pretty face” (2:34) was a genuine mistake which Paul liked and decided to keep.