Julia is another high watermark in John Lennon's songwriting with the Beatles. It is a masterclass in matching the mood of the music with the lyrical message and terrific example of how to write compelling, beguiling song even though you're breaking all the rules. 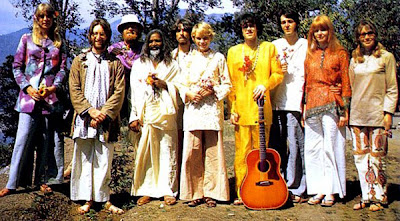 Written in Rishikesh, India it was recorded 3 days before the final mixing sessions of White Album. An entirely solo Lennon performance (with McCartney coaching him from the control room) it took a mere 3 takes to get the basic track down.

John used the same fingerpicking pattern throughout that he employed on Dear Prudence and the intro of Happiness Is A Warm Gun and which Paul used for Blackbird (though Paul's version is more of a sloppy half-strum). Both Beatles had recently learned this pattern in India from Donovan and/or Gypsy Dave. It's impressive to note that even at this late stage of their career they were still learning and incorporating new concepts into their compositions. 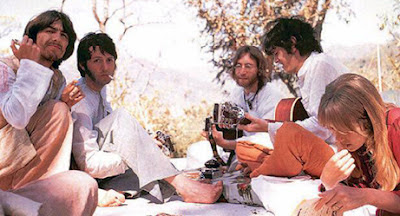 The track is ethereal and weirdly catatonic. The opening monotonal melody, the never changing picking pattern and the oddly stretched-out first syllable in the title all contribute. But beginning and ending each verse with the word Julia, starting on high A and finishing by descending to the lower D, always falling and appearing at the top again, always overlapping with itself like endless ocean waves is a crucial component in establishing the hypnotic, dreamlike mood.

The lyrics also play their part, effectively conveying the unreachableness of would-be mistress Yoko (John was with his wife in India) and his deceased mother Julia.

'Julia' is calling, but never touches him, her smile is as intangible as the wind (though 'windy smile' also conjures up a baby that needs burping!). She is 'sleeping sand' and a 'silent cloud', her smile and her eyes are calling him rather than any particular spoken message. She is always distant - most of the song is sung about her, rather than sung 'to' her. In contrast the singer can't stop 'speaking his mind', 'singing a song of love' even if 'half of what he says is meaningless'.

There is much more to this song than can be packed into a single post but here's some of the key points I'll be hitting in future posts. Get listening to Julia and see if you can spot where I'm heading.