A Hard Day's Write - Why A Beatles Songwriting Blog? 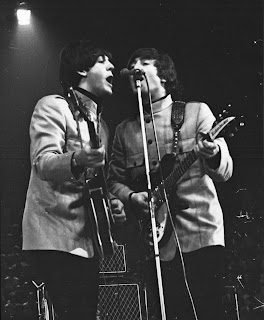 With a massive amount of blogs and books devoted to analysing the Beatles canon already why does the world need another blog?
Well it doesn’t. But I do.
As a songwriter trying to learn his craft who tends towards complexity, I’ve realised that studying Bacharach, Sondheim, Gershwin and all might not be the best thing. The Beatles however seemed to be masters of the simple and accessible, even when what they were doing was really complicated!
Also, I’ve realised I think I know the Beatles back catalogue when I've only heard about half of their albums. Time to go back to school.
And I wonder if their reputation is deserved. After all it’s hard to be objective about a band that is credited with everything from bringing down communism to inventing the teenager. And hard to separate their accomplishments as recording pioneers, live band par excellence and iconic sixties early adopters of psychedelia, eastern religion, drugs & facial hair from their career as songwriters.
So…I’ve decided to study the whole catalogue song by song in chronological order.

First: to sort the wheat from the chaff, the ‘Hey Judes’ from the ‘Wild Honey Pies’, and to find the classic Beatles songs. And then listen to and play them until a little of that McCartney magic and Lennon luck rubs off. Hopefully.
Second: to isolate the elements that made their average songs good, and their good songs great. And then to steal as many of these 'tickets to write' as I can.
Third: to figure out what sort of things Lennon and McCartney did that helped them become so good (Should I include Harrison? We’ll see…). The things that I'm calling The 'Be-atletudes'.

Were they things I can copy or was it just a combination of the Mersey water supply, drugs & studio trickery?

Who Am I Doing This For?

So I guess that if you're a rabid Beatle fan who knows how many bowel movements John Lennon had in 1963 this is not the blog your looking for.

But if you are a songwriter looking to learn how to write catchy and classic songs and have only a passing knowledge of the Beatles' back catalogue you might like it.

And if you're a Metalcore bassist who thinks 'the Fab Four' are Marvel comic book superheroes...stick around kid, you might learn something.
As I’m blogging mainly for my own benefit I make no promises about impartiality or scholarly erudition - others have already done that far better than I could ever do. Instead I'm determined to be totally biased and subjective.

The plan is to post something on the songs each Friday with occasional extra posts appearing midweek. I’m also expecting to blog in far too great a detail on the early albums, get hopelessly behind, become increasingly erratic and superficial around Help! Before finally losing the will to live around Magical Mystery Tour and giving up all together shortly after. Just so you know.
If you have expectations…lower them now.
Posted by Matt Blick at 17:19

Email ThisBlogThis!Share to TwitterShare to FacebookShare to Pinterest
Labels: A Blogs Life