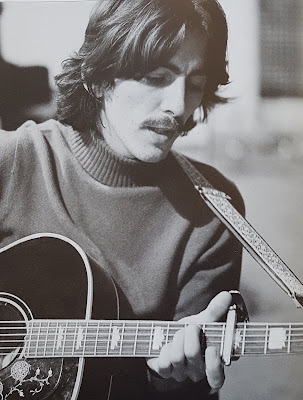 While My Guitar Gently Weeps was one of the few post-Rishikesh songs on The Beatles. 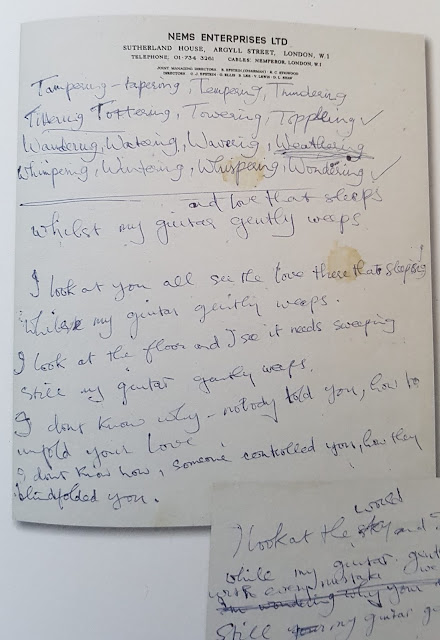 The lyric facsimiles in the anniversary edition, written on 'NEMS London' headed paper, begins with a list of rhymes

and later on in the manuscript

adding further supporting evidence that Harrison was suffering from a bad case of rhyme's disease when he penned this otherwise excellent song.

The manuscript gives a window into the lyrical development. Verse 1 is fully formed but verse 2 develops from

I look at the sky and I notice it's clouding

which is then replaced by

I don't know how, someone controlled you, how they
blindfolded you.

undergoes a minor change as 'why' and 'how' change places

George makes a number of attempts to start verse 3

I look at the powers around

I look at the wars of the world that are raging

I'm thinking of wars everywhere that is raging

I look at the trouble and hate that is raging

none of which he seems as happy with. Verse 3 line 3 is more solid, needing only minor tweaks

This verse survived to the Esher demo

In a similar way the demos and recording notes chart the musical evolution.

The key is Gm. It's still played in Dm but now capoed on the 5th fret. Perhaps the Esher was capoed at 5 too but tuned down a semitone like most of the other demos?

Paul is playing minimal harmonium on the bridge and a few other spots.

The previously undiscovered 'Take 2' outtake has Paul switching to organ but still very much figuring out the chords.

According to the studio notes this had John on organ and Paul on bass. Bizarrely the notes state the tape was slowed down by three semitones. From what? If the key had already risen to Gm and was destined to end up in Am it seems strange to start going down again. Three semitones would put the song in Ebm.

Perhaps it's a mistake – three down from the final key Am would put the song back in the Esher key – F#m. Maybe someone is getting their versions mixed up. Until they release a version 2 outtake (anyone out there have one? Send me a link!) we can't be sure. 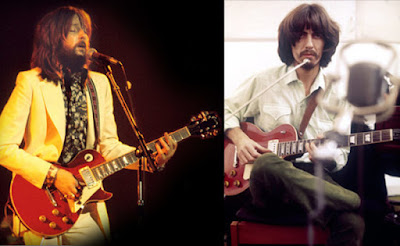 1 Ringo drums
2 Eric Clapton jamming freely throughout the take on 'Lucy' - the Les Paul he gave to George a month before the session.
3 Paul switching live between piano (intro/verses) and organ (bridges)
4 George on acoustic and George and Paul on vocals

Overdubs: George double tracked his vocals and adds more organ (0:58, audible on top of the piano during the guitar solo and continuing for the rest of the song) Ringo adds tambourine and weird sounding tippy-tappy percussion (left speaker 0:34) and there's a distorted bass part played by … who? McCartney on bass (BB) or Lennon on Bass VI (50AE)? It can't be both as the only 'bass' is overdriven and played with a pick.

The case for John

The part, like so many of John's Bass VI performances, is very much a guitar part down an octave, switching between power chords and free flowing single notes riffs rather than diligently performing the role of bass man. Though very un-bass-player-like it's John's best 'bass' performance by a mile.

The case for Paul

From Pepper onwards Paul often overdubbed his bass afterwards. When John played bass, it was usually because they needed it on the basic track and Paul was playing something else (like piano on Long And Winding Road). Here John didn't play on the basic track at all so there was no need for him to play bass – the 'real' bass player could do it. It's likely Paul used his Rickenbacker not the Bass VI (RITH) as the Beatles only had a right-handed one.

If Lennon had provided the Bass VI part it's hard to believe Paul would have been able to resist added a 'real' bass track underneath (as he had done on Back In The USSR). And while it is very 'free' the playing is also tight and disciplined, which is more of a Paul trademark.

Allegedly Lennon is on rhythm guitar (BB) or lead guitar (RITH) but the only electric guitar on the finished track is Clapton switching effortlessly between lead and rhythm.

It used to be thought that Lennon's lead guitar was tracked on the 5th Sep and replaced by Clapton's overdub on the 6th (TBRS). How Clapton's presence was supposed to 'make everyone act better' (as Harrison later stated) when their work on song was already completed is unclear and the outtake answers that - Clapton tracked his part live with the band (on the 5th).

Paul on bass and Eric on guitar leaves John having contributed nothing to the track, but he often absented himself from George's songs so it's a plausible theory.


*According Everett to but it looks more like an 'n' than a 'c' to me!