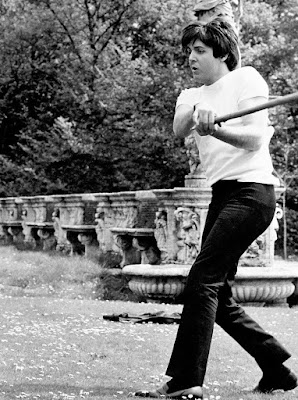 Last time we looked at how Paul constructed wonderful wandering melodies but there's more than one source of melodic stickiness.

Paul uses a fragment of the verse to craft the melodies in the bridge and coda (Ticket 9).

This “Hey Jude” motif occurs in all three sections of the song, moving in the same direction and by the same amount - dropping down a minor 3rd (or one and a half tones). The only variation is the coda slurs the 'He-ey' over two notes.

The childlike simplicity of the chord progression

and the melody's 'conversational' rhythm perfectly represent the subject matter and intention of the song. Note also Paul's gift for placing words - the way he goes down on the words 'bad' and 'sad' but then lifts up on 'song'. It really makes the melody 'sing' (pardon the pun).

How much of this is conscious or premeditated? Probably very little. We're witnessing a genius at work. But, for lesser mortals like us, the more we consciously emulate great techniques the more likely we are to become instinctual artists. (hey, I can live in hope!)

The verse is notable for it's use of anacrusis. Look at the number of syllables that precede the first beat of each bar. 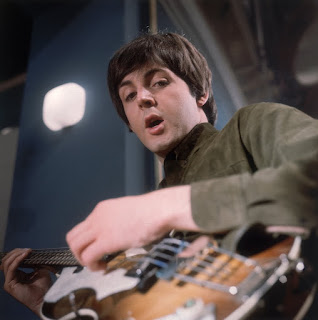 Another point is the contrast between the three sections (Ticket 5). There's is no repetition in the 8 bar verse melody, but the bridge is a 4 bar melody which is repeated and the coda melody, short and simple though it is, consists of 3 one bar phrases with only the 'middle' bar repeated

This contrast between verse and bridge (unrepeating melody vs. tune played twice) is exactly the same as Mother Natures Son and the coda's melodic structure (ABBC) is the same as the chorus of Carry That Weight.

The verse has a solid root inversion chord progression that is almost hymn-like compared to the bridge's elegant descending bassline that moves at twice the speed.

The symmetrical verse contrasts with the bridge's odd shape - an extra bar of F7 serves as a transition between the two sections (0:52) but then reoccurs in the middle of the bridge (a Lennon Extension - Ticket 52).

Lastly there's a key change (of sorts). The verse is solidly in F major but the transitional F7 seems to imply we've transposed to Bb major (Ticket 45) or at least to F mixolydian (Ticket 51). My money's on the latter, as the coda is clearly mixolydian.

The bridge sections ends with F7 to C7 which implies McCartney loves tonal ambiguity. He continually messes with our heads by switching between E natural and Eb throughout the song. The aforementioned F7 (containing Eb) fools us we're heading into a Bb major bridge. But a few bars later we get a C/E (E natural) which remains in effect for a 2 bars till we get the F7 (again) followed by the C/E (again). This F7 segues awkwardly into C7 which gets us safely back to the verse.

The Eb to E natural clash is highlighted in the ascending melody at end of the bridge (nah nah – I know, quoting the lyrics is not that helpful... [1:23] and by the descending chromatic piano lick going into the bridge (Ticket 3).

Paul is simply singing the intervals of the F major chord (F A C) but approaching each one from a semitone below. Again this hook is an extension of a smaller melodic motif. In just the same way Paul used the opening 'Hey Jude' tune to create more ideas, here he takes the closing note of the verse (better E - F). John Barry (or Monty Norman) used the same thing to create the ending of the James Bond Theme (Ticket 4).

Just like The Long And Winding Road all the out of key chord (Ticket 28) action is due to one note. Eb is the common denominator in the melodic weirdness, the F7, and the coda's Eb major chord, where it is part of a trip backwards through the circle of fifths (Ticket 43) or if you want to get grandiose 'double plagal' cadence (Eb Bb F).

The modest attempts at a descant at 1:42 and the way Lennon switches from low to high harmony (just like the old days) show flashes of brilliance and togetherness (Ticket 58).

That wraps up Hey Jude. I'm working on the second episode of the podcast (get on the mailing list now if you want to receive it) and next up on the blog will be Sexy Sadie!