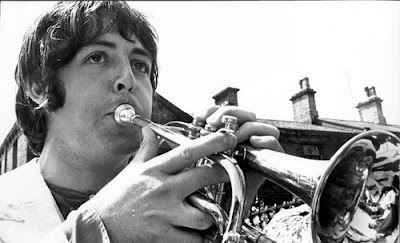 Unusually Lennon & McCartney want to credit each other with Mother Nature's Son. John says Paul wrote it on his own in India. Paul says he wrote it in Liverpool with help from John*.

Apart from 2 trumpets and 2 trombones it's a solo McCartney track. Contrary to various reports there is no Timpani (it's a second bass drum recorded in a stairwell) but there is the sound of Paul tapping on a hardback copy of The Song Of Hiawatha**. And personally I'm convinced I hear a single hit on a snare drum at 2:15.

The 'book drumming' is a nice example of McCartney 'at play' and blends beautifully with Martin's cerebral brass arrangement.

Paul cut the guitar and vocals live, take 24 being the keeper (take 2 appears on Anthology 3). The reverb fades in noticeably after a few seconds on the stereo version (which I find charming) and Paul's Martin D28 suffers from terrible fret buzz (which I find excruciating and inexplicable). Seriously, could the world's most famous band not find anyone to set up their guitars properly?

Listen. Do You Smell Something?

Once again my childhood impressions intrude on this track. Thinking Rocky Racoon was about a real animal is one thing. 10 year old me thought this song was about … Hitler as a young man. I have no idea why. Glad I never told anyone.

In typical Beatles fashion the lyrics are simultaneously brilliant and poor. If songwriters are like stonemasons all three writers (especially McCartney) are excellent in finding the perfect stone to lay on top of another, but their finished buildings often doesn't stand up to close scrutiny.

Here McCartney's descriptions are redundant; music is “pretty”, the field is a “field of grass” and we listen to the “sound of music” (what's the alternative - the "smell of music"?). The one original image is just odd. Hey look! A flying stream!

But all that is irrelevant. Though the lyrics aren't original they are wonderfully evocative. Using a mere 50 words McCartney puts us right into the scene. The lyrical simplicity and the supporting melody and arrangement work perfectly with the subject matter. And though he isn't saying anything deep the way his places individual words displays genius.

Thematically 'music' is central – the “pretty sound of music”, “a lazy song”, “singing songs for everyone” - the boy, the stream and the daisies are all singing.

Technically the lyric is tied together with … alliteration. The 'F' in

Find me in my field

and alliteration and assonance of the 'S' sound

Swaying daiSieS Sing a lazy Song beneath the Sun

Sit beSide a mountain Stream, See her waterS riSe
LiSten to the pretty Sound of muSic aS She flieS

Next time we'll look at the chords. But for now go and look at some of your lyrics. Do they sing?