10:8 The Continuing Story Of Bungalow Bill 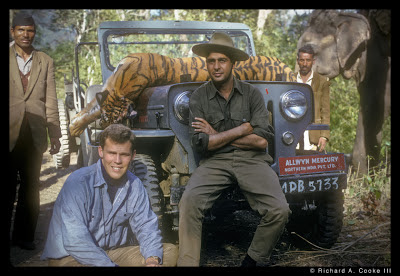 (For more on the intro go here)

The Continuing Story Of Bungalow Bill is a strong contender for sloppiest performance by the Beatles, giving Maggie Mae a run for her money. Deliberately going for a campfire singalong style, (a hangover from Rishikesh where this song was conceived) even Lennon's lead vocals are ropey.

Having contrast between sections (Ticket 5) is a good songwriting technique but here it's too much of a good thing. There's a 'semi key change' from the verse (Am) to the chorus (C major - the relative major) followed by real key change to A Major - the parallel major (Ticket 45) and a tempo change between verse and chorus which is achieved in the same primitive way as the time change in Lucy In The Sky With Diamonds - by a few clomping hits on the drums. The combination of these changes make the verse to chorus seem like a real crunch of gears. The fact that the 4th bar of the chorus is a 2/4 bar, missing two beats (another Lennon edit – ticket 37) completes the 'lunatics have taken over the asylum' feel.

Update: on the original demo version the Lennon edit is a 1/4 bar and the transitions between tempos are much smoother  - you can listen to it here. (Thanks to Lost Originals for the link).

The chorus, though original is both childish and unpleasantly jarring, though to be fair that seems to be the effect John was aiming for. The verse could be said to be employing madrigalism (ticket 49) in the way the 'creeping feel' mirrors someone stealthily tracking tigers in the jungle.

The music is more repetitive than most Lennon tracks with the first two lines of the verse having the same tune and chord progression and obviously the chorus being repeated (albeit in different keys). The melody follows the chord root note movement pretty slavishly throughout but the monotony of that approach is balanced somewhat by the weird chorus chord movement, which is arguably the most interesting songwriting trick on display here. The use of the minor 4 (ticket 8) is something I've written about extensively but here we get a double dose - an Fm in the key of C and Dm in the key of A.

The lyrics, having their basis in true life events, belong in the company of thinly-veiled personal swipes like She Said She Said (Peter Fonda) Sexy Sadie (The Maharishi) and How Do You Sleep (Paul McCartney).

Before we get to I'm So Tired we'll take a little detour and look at something this song has in common with only 11 other Beatles songs but whole lots of Nirvana and My Chemical Romance songs, as well as Queen and Black Sabbath's best selling singles.

Can you guess what it is?

Email ThisBlogThis!Share to TwitterShare to FacebookShare to Pinterest
Labels: How Do You Sleep, Lucy In The Sky With Diamonds, Sexy Sadie, She Said She Said, THE BEATLES aka WHITE ALBUM, The Continuing Story Of Bungalow Bill