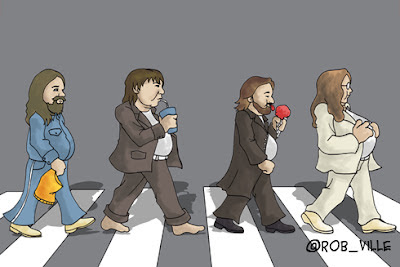 The ever increasing Beatles running time

Love Me Do (1962) - 2:23
The average pop song in the early 60's was well under 3 minutes. Some bands would even print fake shorter running times on their labels to ensure airplay.

I Saw Her Standing There (1963) - 2:56
Two bridges and guitar solo pushed this bluesy rocker to epic lengths.

Within You Without You (1967) - 5:05
mid tempo song with 30 second intro and over 1 minute instrumental section

A Day In The Life (1967) - 5:35
this time it's fade out piano chords, a dog whistle, then a loop originally recorded in the playout groove of the vinyl disc which add over 1 minute

So the longest Beatles song is -


It's interesting that in many of the Beatles fattest songs there's thin song trying to get out. Rather than a truly epic song like Bohemian Rhapsody, from Ticket To Ride onwards we have short songs with something tacked on the end.

Email ThisBlogThis!Share to TwitterShare to FacebookShare to Pinterest
Labels: A Day In The Life, Hey Jude, I Want You (Shes So Heavy), Revolution 9, She's A Woman, Strawberry Fields Forever, The Band Who..., Ticket To Ride, Within You Without You, You Won't See Me