Chapter 2.1 With the Beatles - She Loves You (The Chorus) 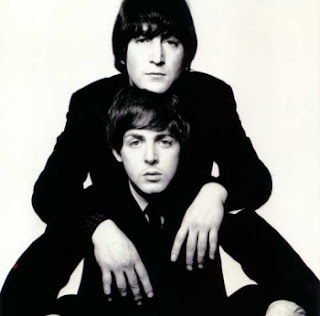 She Loves You is such a masterclass in hooky economical writing that I’m going to devote this whole post just to analysing the chorus.

First, simply having a chorus shows Lennon & McCartney’s development as writers. It’s their first song with a really clear verse/chorus structure. Only Please Please Me & Ask Me Why come anywhere near. Early Beatles songs are dominated by the verse/bridge format, with the title usually coming at the beginning or end of the verse.

A massive factoring the song’s hookiness is that once again the Intro and Coda (though different from each other) are both fashioned from material in the chorus.

The chorus consist of a two part hook
She loves you / yeah yeah yeah
and a pay off
with a love like that…
The intro just repeats the hook, the second chorus repeats the pay off and the coda uses the 2nd part of the hook.

But that's not all. Lennon & McCartney squeeze even more hooks in by having both the pre chorus and the chorus bookend with the lyrics She Loves You and you know you should be glad.

Lastly notice how well the wide open sound of ‘yeah’ suits the tune as opposed to the ‘yes’ suggested by Paul’s Dad. And if that’s too silly try replacing the yeah’s with a backing vocal echo of “she --- loves --- you.” It works on a basic level but doesn’t come close to the insistence of those iconic affirmatives (he said, coming over all William Mann!)

The highest part of the melody (barring the trademark oooh’s) is the first bit of the chorus she loves you yeah . This makes the hook stand out all the more.

The vocals are in unison on She loves you, yeah, yeah , yeah and the part is very dependant on chord tones but on the pay off Lennon hangs on a non chord tone (A - the 6th of the Cm) and brings in his trade mark b3 (Bb) which is a bitter tasting clash with the D7 chord.(see Ticket 22).

I find Lennon’s courage in ignoring chord tones remarkable, he seems to have no sense of shame. He milks the same interval over the same chord in the pre chorus for even longer on she loves you and you know you should be glad. (Ticket 13)

T26 Unlike Lennon & McCartney, using a verse/chorus structure is nothing remarkable nowadays. So let’s turn the tables. Write a song with a Verse/Bridge structure. Hey Jude, Lady Madonna and The Long And Winding Road are great later example.

T4 Instead of writing a new intro and outro, craft them from parts of your chorus. Try and sneak bits of your chorus melody into your verse or pre chorus (like the guitar fill playing the ‘yeah yeah yeah’ part in the pre chorus)

T27 Experiment with placing your key lyric on the highest point of the melody. Does this make it stand out more effectively?

Email ThisBlogThis!Share to TwitterShare to FacebookShare to Pinterest
Labels: PAST MASTERS, She Loves You, Singles