Blessed Are The Limited 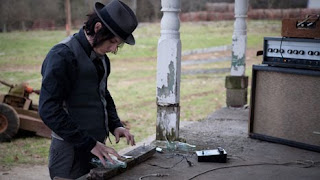 Back to the film.

Seeing Jack White make an electric guitar out of a few bits of wood and a coke bottle threw into sharper relief the Edge’s struggle to find the right setting for ‘Pride’ on a pedal board with more effects than the entire Abbey Road studio (circa 1970) and more processing power than Mission Control, Houston (circa 2010). Right there I got an insight into why the Beatles were able to produce so much, so quickly, and so consistently whereas U2 (and most of their contemporaries) produce so little.

Don’t underestimate the power of limiting your choices.

When you have only 4 tracks, a few instruments, and some reverb you quickly exhaust all the possibilities and you are faced with doing yet another take or just saying ‘let’s move onto the next song.’ Even at their most technically advanced the Beatles had less to play with than I do on the garage band-equipped Mac I’m typing this post on.

I’m convinced that one of the (many) reasons for the Beatles greatness was that they wrote and recorded so many songs. The more you do something, the better you become. Duh!

But here's my point -

The Beatles productivity was inversely proportionate to the number of gadgets they had to dick around with. Spending 2 hours deciding how much decay to put on the guitar echo and 2 days soundchecking a drum kit might mean you take 2 years to record an album. And 2 years in the studio will often need 3 or 4 years on the road to recoup the advance.

Comparisons can be misleading, I know. Bono takes time out to save the world whereas The Beatles practically lived in the studio.

The Beatles recorded over 12 albums worth of material.
U2 recorded 5 albums. (And in the last 7 years they've only recorded 2).

I think there's a lesson to learn.

Do you need to limit your options?

Scratch that. Why don't you try limiting yourself, whether you think you need to or not?

Take a hard look at the following areas.