How To Co-write Virtually 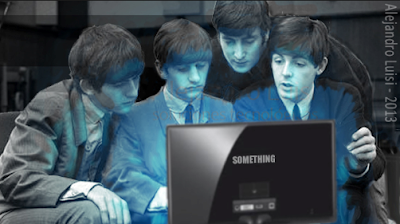 I've not been able to post here for a while as I've been working on a book about Lennon and McCartney. Reviewing the first draft I've had to cull a number of parts that don't really belong in the book and I'll be posting some of them here in the weeks to come. Here's one that that seems very timely.

John and I would sit down and by then it might be one or two o'clock, and by four or five o'clock we'd be done. Three hours is about right, you start to fray at the edges after that. But that's good too because you think, "We've got to get this done!" … We always wrote a song a day, whatever happened we always wrote a song a day. And after that I'd pack up and drive back home and go out for the evening and that was it.
Paul McCartney in Barry Miles: Many Years From Now (p.171)

The last verse was no problem "Two hours is up! C'mon, just put "Repeat 1". That's how a lot of our songs end, "Repeat 1". We'd number the verses, one, two, so we'd write a couple of verses, middle, the chorus, then pretty much repeat verse one. Which was good if it was hooky, it meant that you've heard those lyrics twice, so we'd rammed 'em home, and it saved us having to think of a third verse.

Paul McCartney in Barry Miles: Many Years From Now (p.152)

Though they often started ideas separately John and Paul wrote together in the same room “eyeball to eyeball” “singing into each other's noses” as Lennon memorably put it. But in Covid-ravaged 2020 that's not been possible for many.

Here are some tips for songwriters struggling to co-write remotely.

Broadly speaking you can collaborate remotely in real time, you can tag-team (taking it in turns to progress the song) or you can divide the song up and work on different parts interdependently, assembling the parts at the end.

Emailing files back and forth? - Audio, Lyrics? What format? Mp3, Word? Uploading to the cloud? Virtual documents you both edit?

Whatever options you have always go for the simplest, dumbed down option that will suit your needs. John and Paul started with an old school exercise book. If the system doesn't break down (and it probably will) you still want to remove as much drag as possible. Once you've got your tools get used to them, meaning learn workarounds for the things that don't function as they should or as you'd like them to.

If you're collaborating in real time using conferencing software (Zoom, Teams, FaceTime) give yourself a limited window. John and Paul kept sessions to a three hour limit. After that you can just get too brain-fried.

Writing by tag team method, i.e. one of you move the song on so far and then stopping is another way to do it. But make sure you need to agree when the tag point will be. What are you going to do before you hand off to your partner? Communicate!

You can get rid of some of the waiting around by dividing up some of the more mundane jobs. Fix a problem lyric line, write a guitar solo, come up with three possible intros. If you're handing off the job though it's important to give the person a free hand and accept you can't have 100% input into 100% of the song as you might if you were both in the room. If it's a part you must have a say in then write it together.

If you're writing live via video conference remember a lot of body language vibes type communication is going to be lost. Even more so if you're emailing or texting. Emojis are not the most nuanced communication tools. So try to say clearly and unambiguously what you feel. “I really like that chord pattern”. “The rhythm feels a little awkward”. “These lyrics aren't grabbing me. Can we brainstorm lines for five minutes and pick the best ones?” Follow up the session with a quick debrief and then set up home work assignments and/or future sessions. This can be directly at the end of a session or after sleeping on the song for a few days. The debrief is simply assessing 'where we're up to' - “I think we have verse one and two. The chorus hook needs work. We need to rethink the bridge”.

Email ThisBlogThis!Share to TwitterShare to FacebookShare to Pinterest
Labels: Co-writing