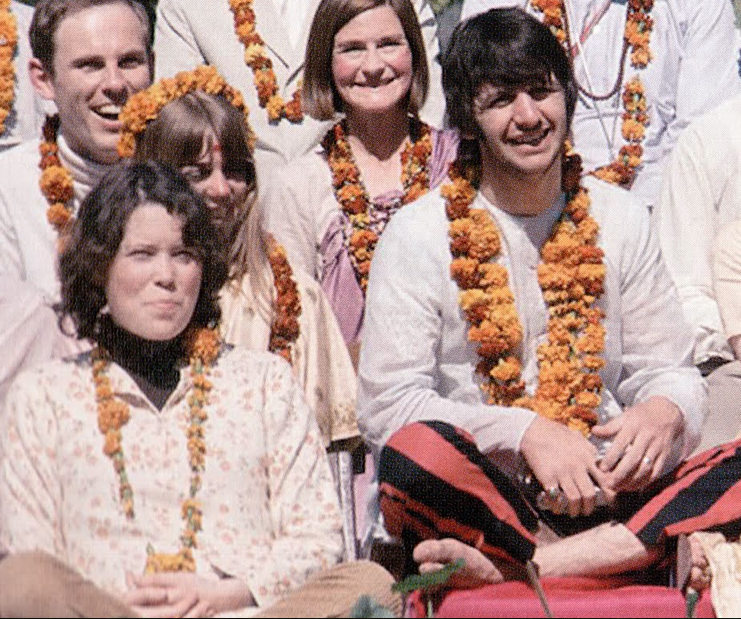 Prudence Farrow with Ringo Starr in Rishikesh. Oh the irony.

Dear Prudence is a fantastic, deceptively simple, song and was one of Lennon's favourites. Perhaps more closely identified with Rishikesh than any other track, it was inspired by Mia Farrow's sister, Prudence, going a little nuts while studying meditation with the Beatles in India. The legend has Lennon singing it outside her door, but Prudence denies hearing the song till she was 'Back In The US(SA)'.

Using the same Donovan/Gypsy Davy finger picking pattern that appears on Julia, Blackbird and Happiness Is A Warm Gun, it's another example of using a technical exercise to write a song (Ticket 59). Other 1968-approved songwriting ideas are the R b7 6 b6 line (Ticket 68) that appeared in While My Guitar (this time in the major form - D, D/C, D/B, D/Bb) and some Lady Madonna style boogie-woogie piano (Ticket 25) making a cameo appearance at 3:31.

Less praiseworthy is the way Lennon (ahem) 'paraphrases' the first line of Raining in My Heart "The sun is out; the sky is blue", changing 'out' to 'up'.

Back in the UK, the band headed for Trident Studios, possibly to take full advantage of the 8 track recorder, laying down tracks that are as inspired as they are scrappy, perfectly capturing the vibe of the song. Ringo however was not there. Having quit the band during the previous session (Back In The USSR) and gone AWOL, Paul stepped up (or rather sat down) in his place.

One of the amazing thing about the Beatles is how world-class songwriters like Lennon, McCartney and Harrison were also prepared to be sidemen on 'the other guy's' songs. And what a sideman Paul McCartney was! – backing vocal, drums, super loud bass, piano, tambourine, cowbell, handclaps and a flügelhorn (audible only to the pure of heart).

I Can't Believe It's Not Ringo™ 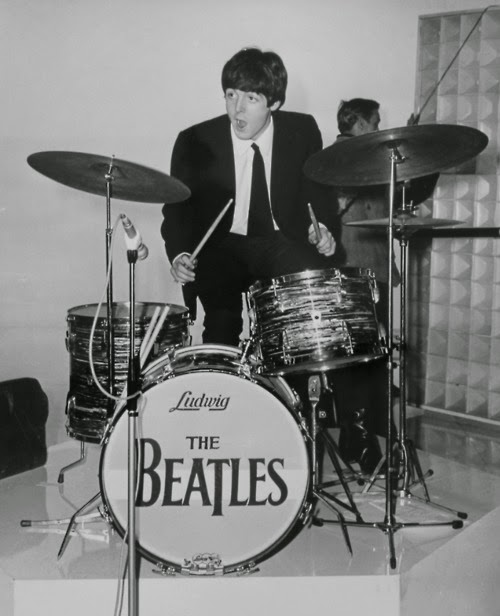 Let's talk about that drumming. The same kind of 'lead drumming' last heard on A Day In The Life, Paul's performance is so good that many people swear it MUST be Ringo. Conspiracy theorists point to how un-McCartney-like it is compared to his solo era skin-bashing. But let me make this clear. It doesn't matter how much of an expert you think you are. Ringo was in a different country. With his family. Writing Octopus's Garden. And Prudence was completed before his return. Besides, a listen to the semi-isolated track reveals a few flubs amongst the flams. And the fact that the fills are overdubbed onto a basic beat makes McCartney sound slightly better than he really is.

The song is a bit of an oddball for a number of reasons. This is the only example of dropped D tuning I can find in all the Beatles catalogue. It has a fade in/fade out bookended chord progression (Ticket 4) something which only shows up in Eight Days A Week. We have the aforementioned lead drumming and rogue blue notes (in the boogie-woogie piano part) like the cellos in Yesterday and Piggies. And the droning double-D strings in the guitar perhaps reflect the Indian genesis more subtly than Tomorrow Never Knows.

Perhaps most importantly from a songwriting point of view, repeated chord sequences are very un-Beatles-like, though standard procedure today (Demons and Radioactive by Imagine Dragons for examples consist of a single four chord sequence all the way through).

Next time. Stuff about chords, small melodies and which scale we're using.
Posted by Matt Blick at 13:33