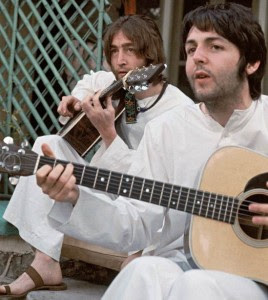 
Musically the thing that stands out about this track is how flowing the melody and chords are. We have an 8 bar verse* with almost no repetition in it.

The melody likewise changes every two bars and yet feels all of a piece and meanders pleasantly without losing it's way. The prime reason for this cohesion is simply McCartney's innate gift for melody. But he does tie it together with a few tricks

Secondly, drones play a major part. Each two bar chord sequence is centered around a different note: D in bars 1-2 and 7-8 and A in bars 5-6. Bars 3 - 4 flip the concept upside down. The root (lowest) note moves but the chord above (Bm) remains static. But what about the final E9?

In the bridge the chords move freely with little repetition but again the entire progression is over a D drone.

Speaking of the bridge let's look at the structure.

Essentially we have an old school AABA structure (Ticket 26). Literally it's an aAABABA with the intro (a) constructed from a fragment of the verse (bars 3-4) and some noodling around the root chord. This is a primitive version of Ticket 4 (create a new section from material elsewhere in the song) something the Beatles do far more elegantly on tracks like She Loves You and Help. Arguably McCartney also does it here in the B section, as the song's bridge chord sequence appears to grow organically from the sequence he uses in bars 7-8 of the verse.

The melody is constructed almost entirely from notes in the underlying chords, but it doesn't get boring because the chords move so much (check out the chord per syllable movement on
“all day long I'm sit...” - Ticket 36) and because there are so many 'out of key' chords (Ticket 28) like the minor 4 (Ticket 8) at 1:28, and the D7 that closes the song (Ticket 18).

The chord progression at the end of the B section (1:21) - D Dmaj7 D7 G/D Gm/D D - contains a descending chromatic counter melody – D C# C B Bb A (Ticket 17), a device which crops up in songs like Something.

Another interesting chord movement is the the way the E9 leads us in the A - D/A section of the verse (0:30). The E leading to the A makes it sound like a key change, a movement know as the V of V (5 of 5)** which is a standard shift you hear in hymns like Thine Be the Glory Risen Conquering Son *** (leading into the “Angels in bright raiment line”)

Next we take a break from The White Album to take in a single – Hey Jude.

*The first and last verses are 10 bars extended by repeating the last two bars.

***The tune written by Handel comes from the aria See, The Conqu'ring Hero in the Judas Maccabaeus oratorio.


Buy The White Album (Amazon UK / Amazon US)
70+ Songwriting Tips From The Beatles
The BeAtletudes
About Beatles Songwriting Academy
Let's Build An Airport EP
Posted by Matt Blick at 13:28