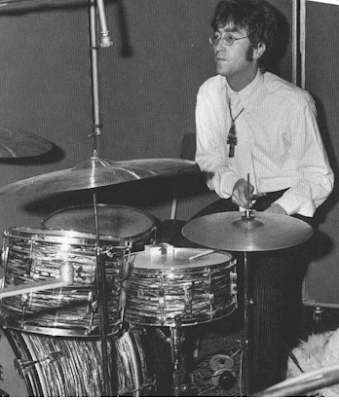 John was a brilliant rhythm guitarist, despite the fact that he didn't have any real sense of timing

I dig the people that notice that I have a sort of strange rhythm scene, because I've never been able to keep rhythm on the stage. I always used to get lost. It's me double off-beats

John Lennon was too much of a free spirit and had too short of an attention span to be locked down to anything as mundane as a time signature. And for someone like that the only options are to function largely as a solo artist (in the Robert Johnson/John Lee Hooker mould), where you're free to add or subtract beats as you feel, or hope you find a band charmed by your talents and technically able to follow and interpret your whims. Every rhythmical idiot savant needs a group of geniuses with the patience to spot and interpret his genius. In the Beatles Lennon found his perfect support group. Johnny Lennon and the Enablers would have been a great name for the band.

Yer Blues, like Happiness Is A Warm Gun, is an important song because it reveals what Lennon's maverick approach to counting could produce when indulged

The 'fake' count in reveals* Lennon envisioned the song as a very slow 12/8 time. Making it a 6 bar blues. But the 5th bar has two extra 8th notes

How you subdivide that 5th bar is up for grabs – 6/8 and 8/8? 12/8 then 2/8? But the genesis is clear. Lennon's just delaying the next bar to allow the guitar lick and the vocal line to finish. This is the essence of the Lennon Extension (Ticket 52). There is a way to keep to 12/8 by slightly overlapping the guitar and vocals. And many bands would have forced their rhythmically challenged singer into it. But all credit to the Beatles for having the guts to their wayward genius be.

So if this is a 6 bar oddity, why does it feel like a 12 bar blues? Well, if you hear it as 6/8 instead of 12 you can immediately see the standard progression take shape.

Four bars on the tonic (I) chord two on the subdominant (IV) back to the tonic for two (I) then a four bar turnaround. Replace G - B7 with B7 - A and lose the rhythmic shenanigans and we could be playing any of a million blues songs. As it is Lennon adds a 3rd of a bar making this a 12 and 1/3 bar blues, or if you prefer 12.333 recurring bar blues.

In the 3rd and 4th verses Lennon introduces more rhythmic weirdness. The first four bars (sticking to our 12 bar template) switch to double time. Millions of songs double (or halve) time with no sense of crunching gear change.

so the new double-time beat is falling in between the + and the 'a'. This makes the switch from one to the other very tricky to pull off - kudos to Ringo here who uses his fills in bar four to ease the band back into the half time feel of bars 5-12. In the 5th verse the band never switches back, remaining at the double-time tempo right through the solos.

All this makesYer Blues an important song for using polyrhythms (Ticket 29) and changing time signatures between sections (Ticket 15).

The Ocean by Led Zeppelin has a number of things in common with this song.


Listen to The Ocean here

* Lennon's count in is the third fake one we've come across – both I Saw Her Standing There and Taxman have count-ins spliced in from different takes just for effect.

More on Yer next time...