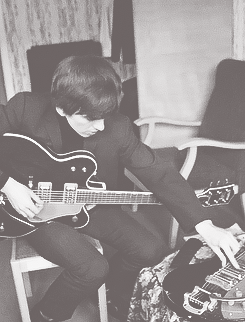 A Song Of Two Halves

I mentioned last time the lyrics reference both the mundane and the massive. That sense of contrasts is fabulously highlighted by differences between the A (verse) and B (bridge) sections (Ticket 5).

Key of A major (Ticket 45)
More meandering melody, larger range (eg the big jump on know WHY and UnFOLD)
Extended rhymes (some might say OVERextended!)
No vocal harmonies
Mostly organ (McCartney and Harrison)

The chord progression in the verse is brilliant, every chord perfectly sets up the next, the initial Am Am/G D/F# F (giving us R b7 6 b6 in the bass - ticket 68) has a grim inevitability to it but the second time it subtly morphs into Am G D and finishes on E (the V) which leads us strongly back to the beginning. We begin to suspect we're in for a straight repeat, but the second time round Am and G resolve to C (the relative major) - a temporary respite from the gloom. But then the E major sets us up to plunge back in.

Everything hinges (literally) on the E major chord in this song. Not only does it set us up for the Am in the verse but when we get to the bridge it seamlessly prepares the way for the new tonic – A major. And how does the major bridge bring us back to the minor verse? You guessed it – E major.

Many people acknowledge this lyric is a mix of the brilliant and spectacularly bad, though there's debate about where to draw the line. For me the second bridge is a horrific case of rhyme fever - where a desire to rhyme pushes you to say things you didn't necessarily want to say and takes the listener out of the song, by drawing attention to a writer who is trying too hard to be clever. On the other hand the verses work wonderfully for me because they convey the same sense of numb detachment that songs like Because or Blue Jay Way achieve.

and the direct repetition of

That central concept itself is a totally original phrase, a unique lyrical hook, conceived from a kind of metaphysical poetic exercise (Ticket 59). Harrison, quoted in the Anthology book

I was thinking about the I Ching, the Book of Changes… the Eastern concept is that whatever happens is all meant to be, and that there’s no such thing as coincidence – every little item that’s going down has a purpose.

While My Guitar Gently Weeps was a simple study based on that theory. I decided to write a song based on the first thing I saw upon opening any book – I picked up a book at random, opened it, saw ‘gently weeps’, then laid the book down again and started the song.

Email ThisBlogThis!Share to TwitterShare to FacebookShare to Pinterest
Labels: Arrangements, Chords, Lyrics, THE BEATLES aka WHITE ALBUM, While My Guitar Gently Weeps