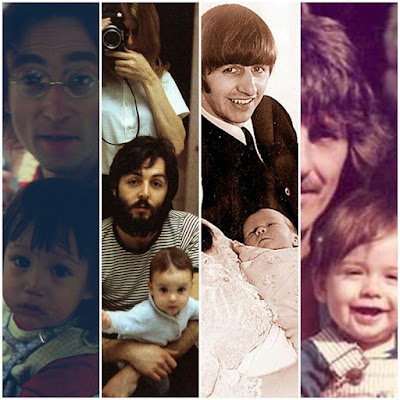 Lennon dismissed Cry Baby Cry as "a piece of rubbish" not only due to the traumatic circumstances it was recorded in but also in he had a tenancy to get bored with anything he'd worked on in the past and grew, under the influence of Yoko and various therapies, to despise anything that wasn't 'real' and autobiographical. This made a meaningless, fictional flight of fancy like Cry Baby Cry an obvious target for the the later Lennon to take a shot at.

Though there's a dreamlike sense of Lewis Carroll hovering over the song, the initial inspiration for the hook came from an advertisement (as did Mr Kite and Good Morning Good Morning)* But the most obvious influence is a nursery rhyme

Sing a song of sixpence a pocket full of rye
Four and twenty blackbirds baked in a pie
When the pie was opened the birds began to sing
Oh wasn't that a dainty dish to set before the king?


It's interesting to see Lennon return to the same source again in 1980. Clean Up Time has the stanza

Here Lennon is infusing old imagery with new meaning. During the 70s Yoko took over the business affairs and John became a house husband. This clever repurposing allows John to be 'real', autobiographical and use borrowed sources all at the same time by changing only a few words.

However that doesn't take away from Cry Baby Cry. It's still a brilliantly constructed fantasy song. The sustained fairy tale imagery and portrait of mundane domesticity is built on the Beatles (and nursery rhyme's) use of parallel lyrics (Ticket 24). Consider the recurring pattern of 'character - location – activity' in the verses**

The origin of the Duchess causes a lot of confusion online. She's from Kirkcaldy, a town on the east coast of Scotland, 11 miles north of Edinburgh.

But as for what The Bird And Bee is, it's unclear. Many say it's a plausible name for a Pub, but the fact that the Duke is 'having trouble with a message' always conjured up the image of him preparing a talk for a group like the Women's Institute.

But what do I know? And did Lennon know? Probably not. Perhaps that very McCartney style vagueness was another reason Lennon disowned this tune.

Next time we'll finish with a look at the music and arrangement.