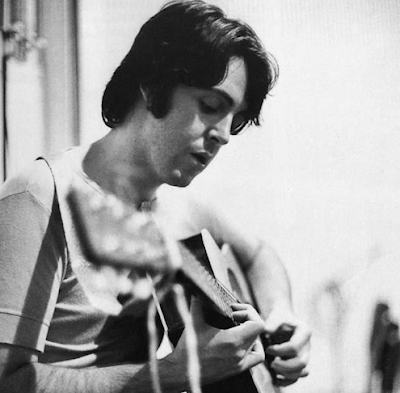 he also contributed guitar on a further three songs

Helter Skelter
Back In The USSR
Honey Pie

Is the White Album essentially a solo Beatles compilation album? That view is widely held, but a gross overstatement. However, in McCartney's case it is nearer the mark. For the White Album Paul became THE guitarist on most his own songs and A guitarist on the rest. The only exceptions (Hey Jude* and Ob-La-Di Ob-La-Da) feature him leading from the piano.

Pre-White Album Paul only played guitar on seven tracks during the entire Sgt Pepper/Magical Mystery era. Of the three he 'took the lead' on, two were Lennon songs - Good Morning, Good Morning and Being For The Benefit Of Mr Kite.

Post-White album his only 6-string contributions to Let It Be are strumming along on Two Of Us and Maggie Mae, though the figure rose again during Abbey Road*.


*As is the normal practice here on BSA I'm including the singles with the albums they belong with chronologically and treating Abbey Road as the final album for the same reason.

Email ThisBlogThis!Share to TwitterShare to FacebookShare to Pinterest
Labels: Paul McCartney, THE BEATLES aka WHITE ALBUM