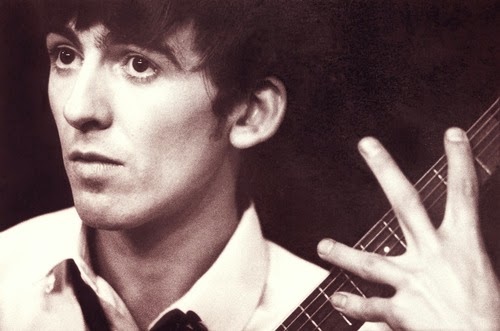 Before we take a look at the songwriting let's dig into the back story.

Exhibit A in the They Don't Take My Songs Seriously Case, the White Album version of WMGGW was the first thing they recorded after Ringo rejoined the group, having quit 2 weeks before. In that time he'd written Octopus's Garden on a boat in Sardinia while they recorded Back In The USSR and Dear Prudence. (Who made better use of the time? Leave a comment!). So chronologically it belongs after USSR and Prudence, but Ian MacDonald and others mistakenly place it before, because the band started the abandoned version in August. But that's as incorrect as saying One After 909 belongs in the Please Please Me era.

On digital versions the song begins with Lennon shouting 'Aye Up' ('hello' in the Yorkshire dialect) but that almost certainly belongs on the end of The Continuing Story Of Bungalow Bill [Update this has been restored to it's rightful place on the 50th Ann. Edition].

It's a great track that even the uncharacteristically long fade out and sloppy performances can't ruin (there are several instances of wrong chords/bass notes), Ringo's tambourine on the bridge wanders from the 4 to the 2, and lest we overly criticise the others, listen how sloppy Harrison's own double tracked vocals are (1:03, 1:40, 1:56, 3:14).

Great individual parts include Paul's fuzz bass and his “nice intro”* on piano (a deceptively simple hook – Ticket 3), Clapton's guitar (notice how the volume is being altered throughout). Ringo's fast brushes (?) overdub and the arpeggiated guitar (in the left speaker) [UPDATE actually Clapton's track switch between lead and rhythm] are clever details that stop the song becoming leaden.

For me the strongest element in the AABA form (ticket 26) is the A (verse) section. The static melody works well against the ever-moving harmony (ticket 48) and brilliantly supports the lyrical sense of burnt out detachment and hyperrealism – noticing both the mundane (the floor needs sweeping) and the massive (the world turning).

Next time, contrasts, chords and lyrics – good and bad.
Posted by Matt Blick at 12:30

Email ThisBlogThis!Share to TwitterShare to FacebookShare to Pinterest
Labels: Eric Clapton, THE BEATLES aka WHITE ALBUM, While My Guitar Gently Weeps