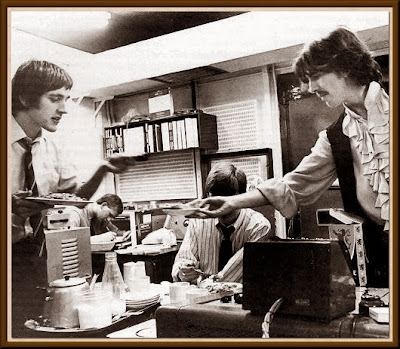 Piggies is a dark children's ditty, a social commentary about class difference, and a song that inspired the Manson murders.

George Harrison began working on the track in 1966 - the same time as Taxman. And it shares the same dour cynicism that seems to be in Harrison's DNA. The year after it was released Charles Manson took the song as an incitement to murder and his followers used “forks and knives” as murder weapons daubing "death to pigs" in victims' blood on the walls. Understandably for some people this has tarnished the song. Ian McDonald calls the track an “embarrassing blot on [Harrison's] discography” referring to “misanthropy” and “the song's uncharitable karma” (p.317-18).

Walter Everett points out the "Orwellian comparison of pigs to socially horrid though outwardly refined tyrants”. Which comes through in an unused verse -


Pig Brother is watching you? The harpsichord was played by co-producer Chris Thomas, Ringo played tambourine and tiny bit of bass drum. Lennon's only contribution was editing a tape loop of pigs grunting. 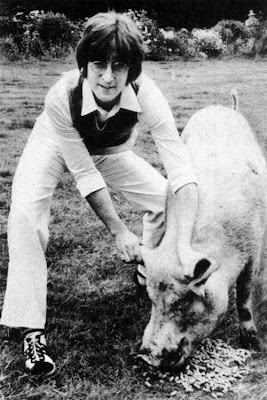 It was thought that Harrison provided all the vocals including the full-on bass vocal in the last verse but the 50th Anniversary edition reveals that John sang bass and Paul helped out with BVs. (What's up with all the bass vocals recently? Previous song Happiness Is A Warm Gun and next-but-one track I Will feature John and Paul, respectively, doing their best Barry White impression).

George Martin, contributes the wonderful string octet arrangement using the same personnel as Glass Onion (which was tracked at the same overdub session).

We're Not In Esher Any More

The most interesting thing about the genesis of this track is that difference between demo and final recording. Whereas Paul's I Will is a note for note recreation of the demo (apart from the odd flubbed lyrics) almost every aspect that makes so distinctive Piggies was added in the studio.

The song, as originally conceived, is a rustic, chirpy 'down on the farm' folk song complete with asthmatic whistling solo. The White album version is a faux-baroque song whose harpsichord and strings hint at 'Orwellian' grotesque characters. And that is all down to George Martin and the man he was grooming to be his successor - Chris Thomas.

But it started with an accident –

We were working in [studio] number two. I wandered into number one and found a harpsichord...we discussed wheeling the thing in...but Ken Scott said, 'No, we can't, it's there for another session!' So we moved our session into number one instead. George Harrison agreed that my harpsichord idea was a good one and suggested that I play it.

The Beatles built a bridge between pop and classical music and you can see it in microcosm in the blues riffs played on a harpsichord and the laid back “one more time” followed by the uber classical cadence (and grunting pigs!).

We'll explore some of these great arrangement twist next time.

Background: thanks to Beatles Bible!
Posted by Matt Blick at 07:30