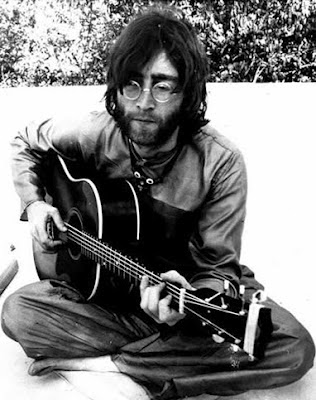 Having looked at the songwriting magic that Lennon casts over Julia with imagery, weird chord progressions and odd scales lets finish with the big picture.

The coolest thing for me is that the song has two different (though not unrelated) verses. I don't just mean 'verse one' and 'verse two'. I mean verse 1 and 5 are constructed differently to verses 2-4 and 6-7. Different chord pattern, structure, amount of lines and bars. The only similarity is the 8 bar 'intro' verse has same last 4 bars as the 'regular' 12 bar verse (the latter, being a 'non-blues 12 bar pattern', is another example of ticket 35).

The inspiration for this unusual 'intro-verse' is clearly the jazz showtunes of to 20's, 30's and 40's - songs like I Got Rhythm, That Old Black Magic and The Lady Is A Tramp. If the source seems unlikely, remember that the Beatles covered songs such as Falling In Love Again and True Love while serving their apprenticeship in Hamburg.

You could also explain the genesis of the section as either ticket 4 - creating an intro from another section of the song (the 'normal' verse) or ticket 41 - using the same ending for two section (making it a relative of Golden Slumbers).

Either way, this 'introductory verse' idea can be heard on Beatles songs as diverse as Honey Pie, Here There And Everywhere and Do You Want To Know A Secret.

Regardless of versal weirdness (hey, I just invented a word!) the song is a solid member of the ticket 26 club. Julia is essentially an AABA structure with no chorus, just like I Saw Her Standing There or Eleanor Rigby.

We can spot a Lennon edit (ticket 37) on the end of most verses because stretching the title out for 7 beats (Ju-------li-a) means Lennon would have had to tack on an extra bar or two to finish the verse before the next one starts.

The song ends on a single ringing chord (ticket 18 - a favourite ending from the early days) made fresher by the fact that the only time Dmaj7 appears is as the last chord in the song!

Next time, a very different kind of love song - Why Don't We Do It In The Road?
Posted by Matt Blick at 07:30

Email ThisBlogThis!Share to TwitterShare to FacebookShare to Pinterest
Labels: Do You Want To Know A Secret?, Eleanor Rigby, Falling In Love Again, Golden Slumbers, Honey Pie, I Saw Her Standing There, Julia, Structure, THE BEATLES aka WHITE ALBUM, The Lady Is A Tramp, True Love