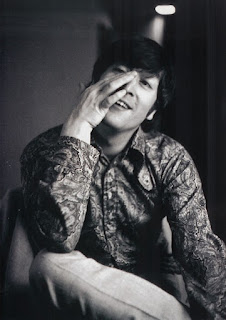 Last time we saw that Julia is a seething mass of non-diatonic chords. So it's surprising to see that, apart from the key change in the bridge, there is only one out of key note in the melody - the Bb that occurs on the Calls ME section of the verse. This song is a good example of ticket 14 - 'write an key melody over out of key chords' – which gives you the interest of unusual chord progressions while avoiding the complexity of an atonal melody.

So although we have an F# in the melody it never occurs at the same time as the F natural within the chord progression (as part of the Gm7 and G9 chords). It's the same for the C# and C, D# and D and B and Bb. The only point where the harmony alters the melody is the aforementioned Bb which is supported by the Bb within the Gm7 chord.

That same point in the song also contains a nice instance of contrary motion (ticket 12). The chords drop from G9 to Gm7 (B falling to Bb, and A falling to the already present F) but the melody rises from A to Bb.This combination of an out of key note, contrary motion, and interruption the 3 note rhythm makes this reoccurring phrase (calls me/touch me) really stand out.

The melody through out really has a sense of ebbing and flowing, perfect for a song with so much water imagery (we'll look at that in a future post).


Take Me To The Bridge


When we get to the bridge we have a true key change (like the bridge of I Want To Hold Your Hand or the chorus of Penny Lane) rather than remaining in the same key but using one or two out of key chords (like With A Little Help From My Friends). Here we head from D major to C#m minor and then C# phrygian.

The three scales involved in the song are as follows

Bizarrely, the chord that establishes the C# phrygian tonality is D major. Why aren't we back in D major at this point? Because the melody is repeatedly using a G# note.

In fact the melody in the shimmering, glimmering part of the bridge has a distinctly japanese flavour, a subtle touch, appropriate for a love song to Yoko Ono. If we take D as the root note and select only the notes that actually appear in those 4 bars we get 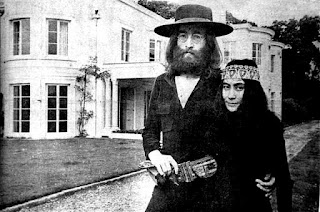 Creating a melody from chord tones is one of the simplest way to write. Just choose each melody note from the chord that supports it. So over a D major you could sing a D (the root), an F# (the third), or an A (the fifth). Extend the chord to a D9 and you could also pick the C (b7th) or E (9th). Many of Paul McCartney's melodies seem to function somewhat independently from the chord progression but John Lennon seemed to write from the chords, creating tension either by using chord movement to against monotonal melodies (the verses of I Am The Walrus and Help!) or by deliberate clashes between melody and harmony such as the repeated E sung over a Bm in Help's chorus or the I just had to laugh line in A Day In The Life where, instead of singing over a G chord as in the previous lines, Lennon introduces and F major chord which scrapes against the B natural in the melody to wonderful effect.

What has this got to do with Julia?

Lennon's melody as we've already seen is almost entirely chord tones. And yet it has none of the Twinkle Twinkle Little Star banality because his focus once again is on the chord progression rather than the melody. Once you have a chord progression this oddly compelling, almost any melody you can construct will be interesting.

Can't get enough Beatles-style songs about mysterious women? Check out Sadie's Sister, my collaboration with Stuart Kidd – free to download here.
Posted by Matt Blick at 08:00

Email ThisBlogThis!Share to TwitterShare to FacebookShare to Pinterest
Labels: A Day In The Life, Help, I Am The Walrus, I Want To Hold Your Hand, Julia, Key Changes, Melody, Penny Lane, Scales, THE BEATLES aka WHITE ALBUM, With A Little Help from My Friends