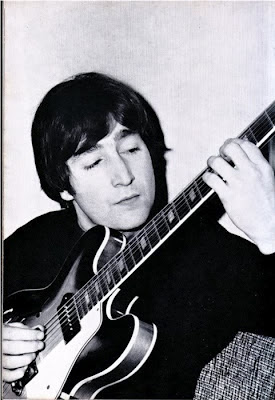 The first and fourth verses have an 8 bar structure

whereas all the other verses have 12 bars

only the first two bars and last four bars are identical.

Obviously having verse with totally different construction raises some questions about whether you can even call them both verses. I'll get into that when we look at structure.

When the verse moves into a different section (verse 4 or the bridge) we get 2 bars of D breathing space. This is essential as the verse is designed to loop back on itself. So when it doesn't we need extra time to finish singing the final 'Julia' (and breathe!).

The 10 bar bridge changes key first to C#m then, when the D arrives, C# phrygian mode.

The Bm6 helps to re-establish the original key (as does the F#m7 and F#mb6). In fact the F#m(b6) to F#m to D forms a quite effective weird little cadence.

So looking at our progressions we have a multitude of out of key chords (ticket 28). There's the old Beatles favourite, the minor 4 (iv) - Gm7, and the much rarer minor 5 (v) - Am7 and Am9. That's tickets 8 & 44. But that's just the tip of the iceberg. Here's the full list with the out-of-key notes they contain

If you do the math (alphabet?) you'll notice that in the course of the song Lennon uses all 12 notes! 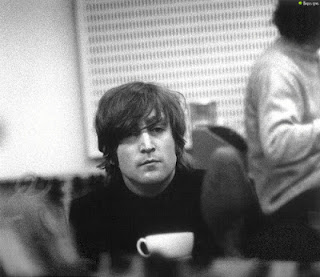 As well as what's in there, what's missing is also interesting. The 3 chord trick I - IV - V is the mainstay of all pop writing yet Lennon doesn't play a straight G major (IV) anywhere in the song. He doesn't even use it's minor substitute Em (vi)! (Ticket 7).

We have an example of a 12 bar pattern that isn't a blues tune (Ticket 35) which is a lot harder to pull off than it might sound (Fool On The Hill is another nice example).

As well as classic Beatles chords we have classic progressions. The bridge ends with a pattern containing a descending chromatic line starting on the b7 of the scale (ticket 31)

placed within the F#m chord that line gives us

which is exactly the same progression that most famously occurred in Paul McCartney's song Eleanor Rigby.

Lennon creates a little subconscious hook in the chord part by hinting at the F#m7 - F#m6 - F#mb6 - F#m pattern with the Bm7 to Bm6 progression that comes just before it. (Ticket 9 – use fragments of the existing melody/chord to create new parts)

A far stronger instrumental hook (ticket 3) is the way Lennon plays almost whole vocal melody on the top string. This may have either been because he created the vocal line by singing the guitar part or wanted to play what he was singing to support his vocals (it is a pretty odd melody).

Either process could be a good starting point for YOUR next song.

Can't get enough Beatles-style songs about mysterious women? Check out Sadie's Sister, my collaboration with Stuart Kidd – free to download here.
Posted by Matt Blick at 07:30

Email ThisBlogThis!Share to TwitterShare to FacebookShare to Pinterest
Labels: Chords, Eleanor Rigby, Julia, THE BEATLES aka WHITE ALBUM, The Fool On The Hill, Tributes/Parodies/Pastiches