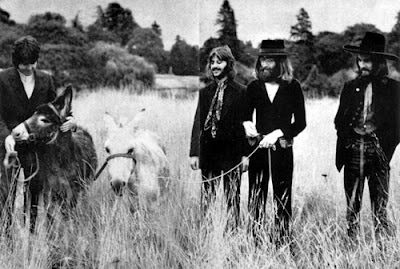 Dig A Pony is a song of two halves. The chorus is a lover's plea for help along the same lines as I Want You (She's So Heavy) whereas the verses are sub par Dylanesque gibberish that doesn't even try to reach for the heights of I Am The Walrus. It's all lazy free association wordplay (Rolling Stones = roll a stoney) and arbitrary rhymes (celebrate/penetrate/radiate/imitate) which tread the same ground as George's outbreak of rhyme fever on While My Guitar Gently Weeps (alerted/diverted/perverted/squirted), only less successfully.

The music is not much better. The beat plods and the verse chord progression is angular and ugly. Beginning on the root chord (actually the same alternating A to D/A that drives I've Got A Feeling) we have

A few clever touches, but I don't think there's a single idea in this song that John hasn't used to better effect somewhere else. It's not even the only song with 'Dig' in the title for crying out loud!

And on that rather underwhelming note – we have finished our fourth album! So before we dive into the White Album (which personally I'm looking forward to immensely) you can expect a couple of 'concluding thoughts' type posts, an index of all the Let It Be posts and a review of three Paul McCartney biographies!!!!!
Posted by Matt Blick at 06:30

Email ThisBlogThis!Share to TwitterShare to FacebookShare to Pinterest
Labels: Bob Dylan, Dig A Pony, Hall of Shame, Ive Got A Feeling, LET IT BE (album)