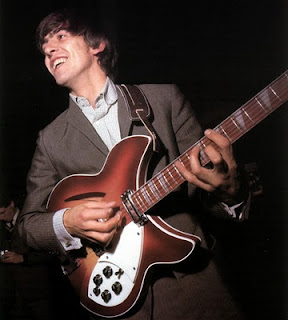 Something is one of the most unusual classic songs around. We've already documented some of the musical curiosities, but lyrically the song tells you nothing about the beloved other than she moves him, woos him and shows him things. Oh, and she smiles.

Though details are sparse one thing that holds together is the amount of repetition in the lyrics.

First there is some direct repetition –

I don't want to leave her now, you know I believe and how

ends every verse and

appears four times in the bridge

with similar instances in the other two verse

But Harrison's use of ticket 24 (parallel lyrics) is the glue that holds the whole thing together, most notably in

something in the things

attracts me like/that I don't need no other lover

not to mention the various

Next time we turn up the contrast.