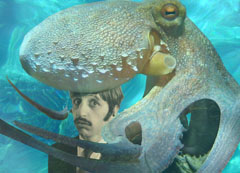 When Ringo walked out on the session for the White Album and went on holiday we lost his drumming on Back In The USSR & Dear Prudence but gained Octopus's Garden, which he wrote on a boat, and on marijuana (in that order). The song represents a high watermark in Ringo's Beatles songwriting.

Sadly that's not saying much.

Allow me to present a curious mixture of songwriting lessons inspired by the good and bad songwriting on display here.

How to write a bad song

Use a cliched chord progression for over 75% of your song

Apart from a very short intro the whole song is based on an AABA structure. The A section is the standard doo wop chord sequence

which also reappears in the solo. Dominic Pedler (in his outstanding book The Songwriting Secrets of the Beatles) calls this progression “the most cliched of cliches” (p.49). He's not the only one.

The vocals stick to the chords like glue. Most of the time Ringo is tracking whatever chord is playing at the time either by singing a fifth (in the A section) or the root (in the B section). See below (chord tones are in bold)

Make sure your melody varies from verse to verse in rhythm, pitch and number of syllables

Maybe I'm being harsh. Lots of artist do this, even Lennon & McCartney, but Ringo really goes overboard on verse 3. He even drops the rhyme scheme at the end (more on that later).

Let the need to rhyme dictate what you write

Why did the octopus build it's garden near a cave?
Because it was beneath the waves! Obviously! (I'm just sayin'...)

Next time we'll get more positive...