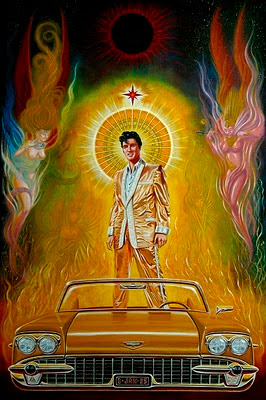 Sun King by John Coulthart
Welcome back to Beatles Sonwriting Academy and the first post of 2011!!!!

Did I say the Beatles rarely ripped off other groups? I spoke too soon. Sun King is a lame parody of Fleetwood Mac’s snoozefest Albatross. In Feb ’69 Peter Green’s lazy instrumental was topping the UK charts. 5 months later the Beatles were ripping it off in order to produce this sloppy soporific song that doesn’t really stand up – in or out – of the Long One medley.


In 1980 Lennon said the song was "garbage". In 2011 I agree with him. We have the Albatross section in E major, followed by a ‘chorus’ in C major. The chorus section is OK, but Lennon could write tunes like that in his sleep. The third section, is a recap of the Albatross section topped off with a monotonal vocal (in 3 or 4 part harmony) singing gibberish - a combination of Spanish, Italian, Portuguese and ‘Scouse’. Here’s a couple of attempts at translation


When, by a lot, my love gives happiness to my heart,
World reporters, my love girl is green for all.
Thanks for this very much, what big hearts


When, for a lot, my love [has a] happy face,
World paparazzi, my love girl parasol.
How much is the overcoat?
So [very] much that can eat it. Carousel

Verdict? The most original thing on this track is the synthesized crickets.

Here’s a few quotes from the very wonderful The Beatles Ultimate Experience (aka BeatlesInterview.org)  – highly recommended...


JOHN 1969: "We just started joking, you know, singing `quando para mucho.´ Paul knew a few Spanish words from school, so we just strung any Spanish words that sounded vaguely like something. And of course we got `chicka ferdy´ in. That´s a Liverpool expression...it doesn´t mean anything to me but (childish taunting) `na-na, na-na-na!´ `Cake and eat it´ is another nice line too, because they have that in Spanish-- 'Que' or something.

GEORGE 1987: "At the time, 'Albatross' was out, with all the reverb on guitar. So we said, 'Let's be Fleetwood Mac doing Albatross, just to get going.' It never really sounded like Fleetwood Mac... but that was the point of origin."