Book Review: Revolution In The Head 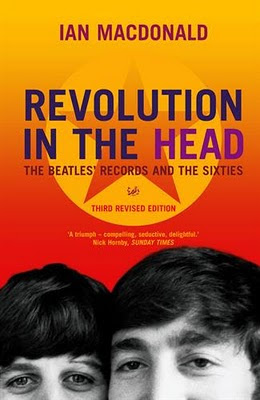 I can’t recommend Revolution In The Head highly enough. For quite a while I was put off by the subtitle. ‘The Beatles Records and the Sixties’ sounds like a ponderous sociological essay on the culture the music was created in.

But the book is actually a brilliant song by song analysis of the music. Every track is presented chronologically looking at when, where and by whom, it was created followed by a page or more of insightful and benignly opinionated analysis.

The third, and final, edition* (Macdonald died in 2003) covers not only the original EMI releases but the ‘Threetles’ songs and a number of tracks from Anthology and Live at the BBC as well.

This is an outstanding book. That Macdonald manages to seamlessly weave in the story of the Beatles as he goes along is a testament to his skill as a writer. The revealing information he gathers is a witness to his diligence as a researcher. And the fact that he has such real insight into the music itself is a mark of his erudition as a music critic who has really, really listened to the music he’s writing about.

It would be a shame for all this skill to be misused in the cause of academic butt-kissery, but happily this is not the case. MacDonald is refreshingly, sometimes hilariously, his own man, cheerfully slaying a few sacred cows in the Beatles oeuvre while at other times lavishing the highest praise on a relatively overlooked early album track. But it’s a mark of his deep knowledge of the music that no matter how many times you may disagree with his conclusions, you never lose respect for them, or him.

As well as 338 pages on the music, there is a 42 page introduction putting the music into the cultural context. Macdonald again proves his worth by making such a potentially dull subject absolutely fascinating. (That said, if you’re a songwriter like me you’ll want to get straight into the songs and leave the intro for desert).

What else?
If I had to pick one book as required reading at Beatles Songwriting Academy it would be this one (assuming of course you can already play the songs!)

Author and music buff Nick Hornby is quoted as saying

“After finishing it, I went out and bought a pile of Beatles CDs and listened to them properly for the first time in my life”

This book may have the same effect on you.