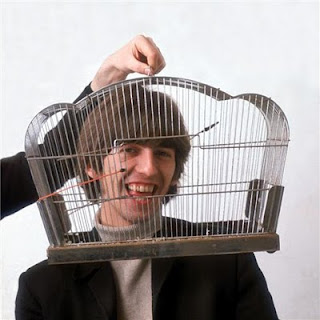 The answer to the question I posed last time was – the song was originally only 1:47 long. Phil Spector simply copied and pasted almost the entire song to increase the length.


I Me Mine was the last song for Let It Be that The Beatles worked on, by which time they had abandoned their no overdub policy (even before Spector got his grubby mitts on the tapes). Indeed this was one of the few tracks recorded under the personally direction of the understandably jaded George Martin.


This is a song with such a strong verse that it manages to carry a chorus that is almost totally devoid of interest.

Chords – the progression is a standard 12 bar blues (or at least it would be if it didn’t drop the last two). T19 Altered 12 bar blues.

Melody – one note throughout (and McCartney’s vocal harmony has only one note too).

Lyrics – Just the title with an extra ‘me’. This is usually no bad thing but remember we’ve already heard “I, Me, Mine” seven times in the verse!

So on every level Harrison picks the most obvious option. On it’s own, or even in any other song, this would have to be in the running for most boring chorus of all time.

How do they get away with it?

2) The song is so short. The 'pre-Spector' structure is Intro/Verse/Chorus/Verse.

3) The way they navigate the time changes into and out of the chorus is clever and well executed. Contrast this with Ringo’s 3 clomping drums between the verse & chorus of both Lucy In The Sky With Diamonds and The Continuing Story Of Bungalow Bill.


Harrison uses the same little rhythm (a quaver and two semi quavers) all through the verse, on through the day, through the night, frightened of, everyone’s and all the I me mine’s.

The notes are as follows

The rhythm makes it incredibly hooky but varying the notes prevents it becoming monotonous.

We also have T24 lyric pairing (through the day/night, no one’s frightened/never frightened) and T18 a single chord end (on a b6!).

We’ll finish off next time with a look at the lyrical structure.

Email ThisBlogThis!Share to TwitterShare to FacebookShare to Pinterest
Labels: I Me Mine, LET IT BE (album)