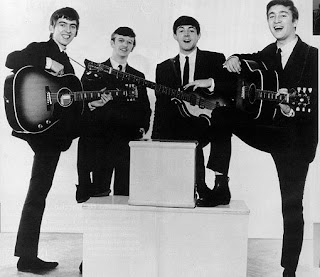 The 3rd song recorded for Parlophone is the first that shows signs of true genius. The playing (especially Bass & Drums) is brilliantly tight. The song is a model of both economy and ‘hooky’ writing.

Intro. The first hook is the opening lead guitar/harmonica melody. This is essentially a slightly adapted version of the first half of the verse melody. What that means is that when you hear the verse for the first time you feel you’ve already heard it before. Genius!

Note also the economy of doing this with just the first half of the tune. Why take up 14 whole seconds when 7 will do?

Next the verse restates the melody and you might say develops it (4 bars now instead of 2 bar). But McCartney adds a static harmony (remaining on the high E) as Lennon descends the scale from E to G#. This use of oblique motion gives a memorable ‘chiming’ effect to the tune. Bars 4 and 8 of the verse have no vocals, but what could be a dead bar at the end of each phrase is filled with two very distinctive guitar fills. First off-beat chords G(bIII) A(IV) B(V) – doubled by Harrison for extra effect, and then a single note root, octave, fifth fill, this time emphasised by the drums dropping out. 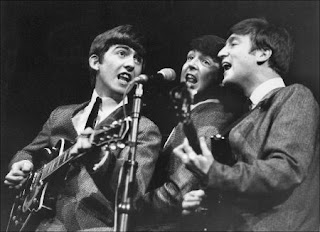 The Pre Chorus again feels incredible hooky due to the call and response vocals “Come On”, the ascending B.V. harmony and the accented ‘pushes’ causes a build in tension which brilliantly reflects the lyrical theme of romantic (sexual) frustration and releases into the ‘chorus’ (if you can call something a little over two bars long a chorus). To my ears the third chord vi (C#m) is unexpected too.

More economy in the turnaround (a recap of the intro). Heading back into the verse they play it once. Going to bridge we only get half. This means that every single time you hear that intro hook it’s different. The outro is the same length as the intro but has vocals over the top.

The bridge is a perfect contrast to the verse. The busy eighth notes of the melody against the verse’s strident quarter notes, the repetitive semitone movement against the almost whole octave descent and the solo voice as opposed to the pealing harmony. The end of the bridge however bears more than a passing resemblance to both the beginning of the verse and the end of the chorus adding yet another layer of familiarity.

Finally the outro is a mash up of the intro and the end of the chorus, and just as you begin to expect a fade out there is a blistering set of non diatonic chords I(E) bIII(G) bVI(C) V(B) I(E), a hint of the first verse fill, and it’s all over in 2:03. The first sound after the final chord died away was producer George Martin saying, “You’ve just made your first number one.” He was right. It truly is a thing of beauty. 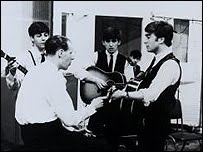 What can we take away from it? Well, just listening to a classic like this over and over again can’t do a songwriter any harm.

But main things are

T2 Brevity – try cutting away all the excess. Do you need to play that riff four times? How about twice? Or once? Or half?

T3 make everything a hook. Even a one bar guitar fill.

T4 Try to create intros/outros/solos from existing parts of the song. This will greatly increase the stickiness of your song. The Beatles were masters of this (See Help for example). Nirvana did it too - on the solo of Smells Like Teen Spirit.

T5 Have a bridge that contrasts with the other musical sections fast/slow, wide/narrow range etc.

Any shortcomings? Yes -the lyrics are clumsy and trite. Lennon is feeling blue yet again (there’s always rain in his life). But unoriginal as they are the music matches the mood so perfectly that it covers a multitude of lyrical sins.

Anthology 1 contains an early alternative version of Please Please Me