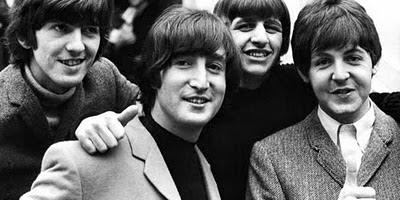 
Last time we had an introduction to the minor 4 chord (iv), now lets take a look at where the Beatles use it in their own songs. First a couple in the key of A


I Call Your Name is in the key of E and the end of the verse goes II, IV, iv, I

(Notice the iv here is in the first inversion, with the Ab in the bass rather than the F. It’s still the minor 4 though).

There are a few other songs that hint at this change – the chord pops up in Dear Prudence’s main guitar pattern, as a passing chord in Her Majesty (thought it may be a mistake) and on the ‘unreleased’ What’s The New Mary Jane?


This progression has cropped up a lot post-Beatles too. Oasis used it (surprised? – me neither) in Don’t Look Back In Anger


And Green Day’s - Wake Me Up When September Ends is another example.

C wake me up Cm when September G ends


Next time we’ll look at songs where the Beatles use the minor 4 (iv) alongside the minor 6 (vi).

Email ThisBlogThis!Share to TwitterShare to FacebookShare to Pinterest
Labels: Blackbird, Chords, Golden Tickets, Green Day, Hello Goodbye, I Call Your Name, In My Life, Oasis, When I'm Sixty Four, You Won't See Me