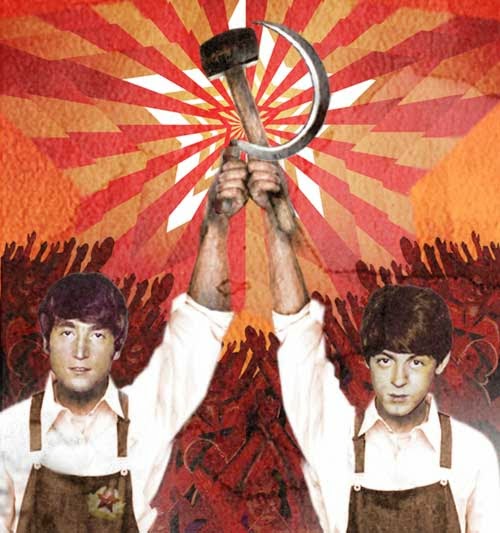 Back In The USSR was the reason Ringo quit the Beatles, the only track to feature all three remaining members on bass AND drums and a sort of multilayered parody, channeling both on Chuck Berry and the band that plagiarised him – the Beach Boys.

I wrote that as a kind of Beach Boys parody. And 'Back in the USA' was a Chuck Berry song, so it kinda took off from there

It's tongue in cheek...'Georgia's always on my mind', there's all sorts of little jokes in it...We added Beach Boys style harmonies

The Beach Boys elements (which Mike Love claims credit for) manifest in the bridge and the all-American vocab like “gee”. There is a nod to “Beach Boys style harmonies” but it's caricature rather than careful pastiche – a Mike Love approved bass part, a single high wordless descant and the main melody. No dense Wilson richness, though the Beatles were certainly capable of that).

Flew in from Miami Beach B.O.A.C.
Didn't get to bed last night
On the way the paper bag was on my knee
Man, I had a dreadful flight
I'm back in the USSR

Verse one is a really strong opening and sets the scene wonderfully with the positive feelings towards Russia being developed in the second verse (Gee it's good to be back home). But it's instructive to look at how McCartney developed the song in direct relation to the template Back In The USA. Because a great parody is not merely 'one song to the tune of another' poking fun at something, but in the hands of a true artist (like Weird Al) uses the lyrical shape and development to inform the lampoon (Ticket 71).

Back In The USA

Oh well, oh well, I feel so good today
We touched ground on an international runway
Jet propelled back home
From over the seas to the U.S.A.

Back In The USSR

Flew in from Miami Beach B.O.A.C.
Didn't get to bed last night
On the way the paper bag was on my knee
Man, I had a dreadful flight
I'm back in the USSR

I feel so good today/Man, I had a dreadful flight

and naming his home in the last line.

From over the seas to the U.S.A./I'm back in the USSR.

New York, Los Angeles, oh, how I yearned for you
Detroit, Chicago, Chattanooga, Baton Rouge...
From the coast of California to the shores of Delaware Bay

They're really rockin' in Boston, in Pittsburgh, Pa.
Deep in the heart of Texas and round the 'Frisco Bay
All over St. Louis and down in New Orleans
All the cats wanna dance with Sweet Little Sixteen

which is the track which Brian Wilson 'rewrote' as Surfin' U.S.A.

Which brings us full circle!

Ringo never played Back In The USSR with the Beatles, but he did perform it with these guys...

Email ThisBlogThis!Share to TwitterShare to FacebookShare to Pinterest
Labels: Back In The USSR, Chuck Berry, Lyrics, Ringo Starr, The Beach Boys, THE BEATLES aka WHITE ALBUM, Weird Al Yankovic