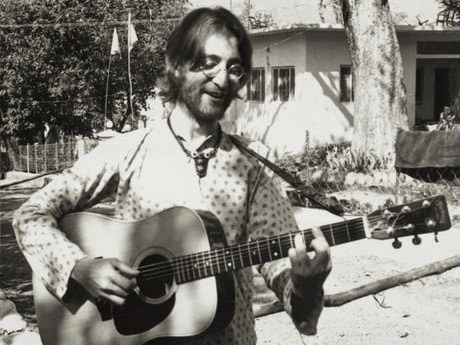 Like most Beatles songs, Prudence keeps wandering out of key but generally you'd expect this sunny track would be major. Arguably, it's in the mixolydian mode (Ticket 51).

The melody avoids picking sides by not using C, C# or G (Ticket 14) creating an 'in key' melody over out of key chords (Ticket 40).

But freshening things up with D mixolydian isn't enough for Lennon, who uses the chord progressions to spices things up by adding F major and Ab major (in the brilliant spooky end to the bridge at 2:01) to the A major/D and D major/Bb.

Take a moment to play that sucker. It's NAYSTY! Bb D F# A. Then add Lennon singing an E during that chord (DEAR prudence). Oh the humanity! How can such a cluster from hell (D E F# over a Bb bass) work outside of a horror film soundtrack?

The Beatles rarely kept their chord progressions in key and Lennon was great at singing non-chord tones and making them work (the chorus of Help is a personal favourite) but here you have both. How did it work and stay so sweetly melodic?

First, the chords appear as arpeggios rather than strummed 'block chords' which softens the dissonance. Second the dissonance (Bb) occurs as part of a logical moving line (D C B Bb) as opposed to being suddenly hit over the head with a cluster. Similarly, the non-chord tone in the melody (E) drops to the root (D) and then the 5th (A) going from outside to solidly inside (Dear Pru-dence).

Another unconventional thing about the verse is how the bass ditches the R b7 6 b6 progression (D C b Bb) after the first go and replaces it with A C B Bb. Who came up with that? The first note in Lennon's guitar part is the open A string followed by 'both' D strings. So maybe Paul was just following the guitar (for once). But Paul also made exactly the same substitution on Lennon's Lucy In The Sky With Diamonds which has no similar guitar line. Maybe they're both geniuses. 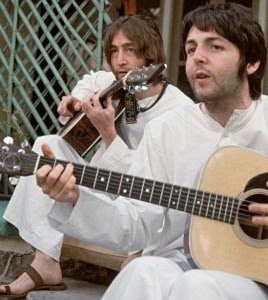 there's a nice contrast between the A and B sections (Ticket 5). A has a descending chord pattern and B ascends. Speaking of contrasts the final verse ends with some contrary motion (Ticket 12) with the lead guitar heading heavenwards (the sun is up) as the chords keep moving down. And preceding that is a lovely guitar counter melody.

The verse is full of clever development. Uncharacteristically we have two different melodic ideas (dear prudence and the sun is up) over the same chord sequence. The latter part is an example of static melody over moving chords (Ticket 48).

And I'm sure that piano is sped up.

Email ThisBlogThis!Share to TwitterShare to FacebookShare to Pinterest
Labels: Dear Prudence, Lucy In The Sky With Diamonds, Scales, THE BEATLES aka WHITE ALBUM